Windjammers has hit the Nintendo Switch. This Neo-Geo classic throwing disc game originally from the 90’s became one of the most popular titles. Dotemu is behind this and more cool retro games coming back on consoles now. So there may be plenty more of their titles coming, following this Windjammers review.

Windjammers is a different spin on the old school PONG game. 2 players face off on a court and must protect their goal lines whilst trying to throw discs passed their opponents.

The formula is simple and Windjammers has all the looks, sounds and gameplay of a 90’s fighting game. The Switch version of this game has local multiplayer, online battling and arcade progression modes.

How does Windjammers play?

Windjammers is a fun game to play. At its most basic level, everyone has heard of PONG or table air hockey and has probably played it in some form or other. Windjammers takes this and makes a slightly different spin on it.

Windjammers is a blend of fighting games and 90’s beach volleyball sports. 2 opponents face off over a net and must attempt to throw a frisbee disc into goal zones to score points.

I enjoyed playing Windjammers and really liked the simplicity of the one vs one battling style. There’s a 90’s fighting game buzz to Windjammers that made me remember playing Streetfighter on the Nintendo SNES system.

It is easy to pick up and play but under this shell is a complex game with lots to learn. Each player has their own move set or special move. There is a lot more going on here than in the original game.

In Windjammers, you score points for getting the disc past your opponent. Each goal zone is split into 3 score zones which reward either 3 or 5 points. to win a game you need to score 11 or more points. To beat your opponent you have to win 2 games. 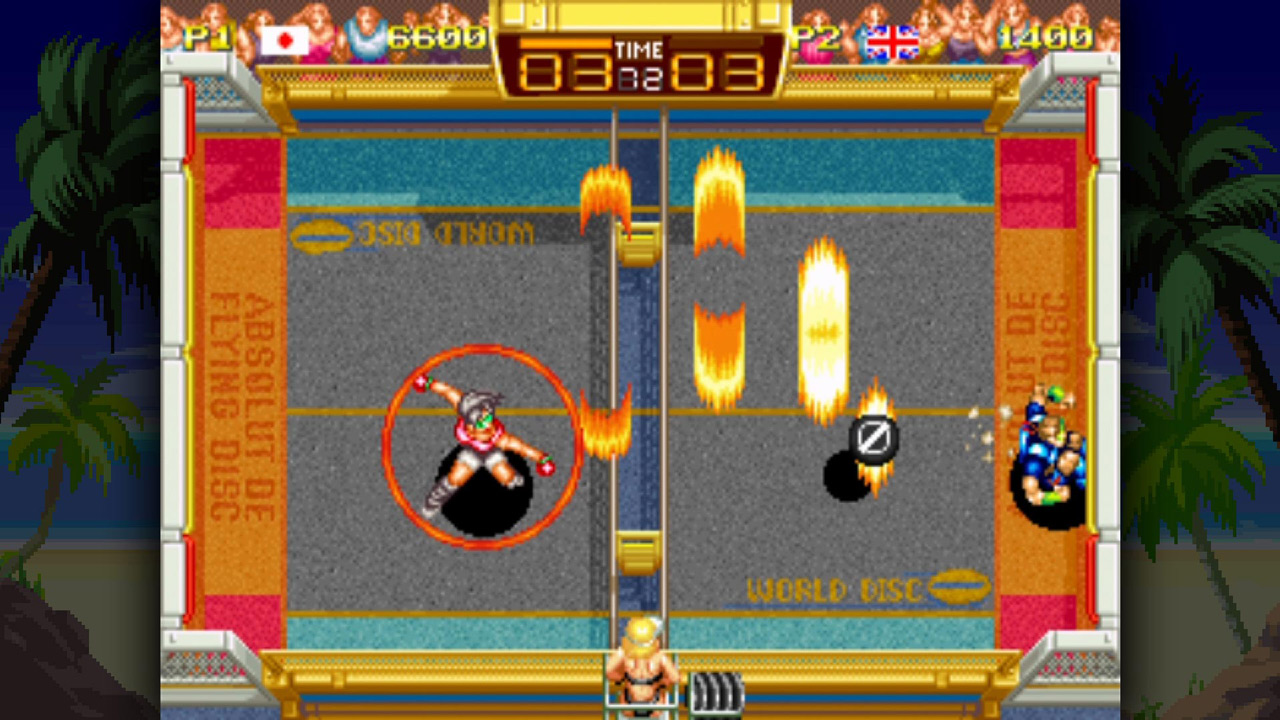 Each of the different six players has their own special moves and to trick the flying disc past your opponent.

There are 6 different arenas to play in. From the beach volleyball court to the indoor sports arena some of the locations feature additional hazards to make the disc bounce in a more unpredictable manner.

One of the play mechanics that rewards points are how quickly you can catch the disc. The sooner you catch it, the fast you can throw it back. You can do log shots to put pressure on your opponent.

If they drop the disc you score 2 points. But beware lob shots can be quickly converted into special throws.

Each player has their own special throws. These are different and vary from crazy zig-zag moves to fireballs that push your opponent backwards over the goal line. You can also add spin to the flying disc throw to curve the path around an opponent.

As I mentioned earlier, there’s a lot to learn if you scratch the surface of this game.

Windjammers has a 16-bit 2d graphics style. Even the game video settings can be tweaked to have a 90’s look of the 4:3 screen ratio and resolution of an old CRT style monitor or TV. It’s also fun to switch on the overscan lines to make it look old school.

If you wish you can play in 16-9 screen ratio too. I would recommend playing in the 4:3 screen mode as it looks the closest to the original. There is some heavy screen flashing in this game too, from the era of the 90’s with bright colours.

The Nintendo Switch offers TV and hand-held gaming modes and Windjammers looks and plays well in both modes.

Most importantly there is no noticeable input lag on the controllers which many emulated games have.

Windjammers include the whole sound experience that you would find in a base pumping 90’s arcade machine.

I really liked how there was an option to use the original Neo-Geo CD soundtrack instead of emulated music. With the shouts and cries of ‘here comes a new challenger’ to the referee yelling ‘match point!” the game sounds are a superb trip of nostalgia.

The music really gets you into the competitive mindset with its pumping beats and retro midi tunes.

Windjammers has the most popular 2 players local battle mode where each player removes a Joy-Con from the Switch and faces off on the court. If you don’t have a friend to enjoy local couch mode you have 2 other options.

You can either play arcade mode, where you face off against other CPU controlled opponents. The arcade mode is my favourite mode with the whole ‘Streetfighter’ fighting game feel to the menu.

As you progress through arcade mode you have coin credits to allow you to restart if you lose to an opponent. 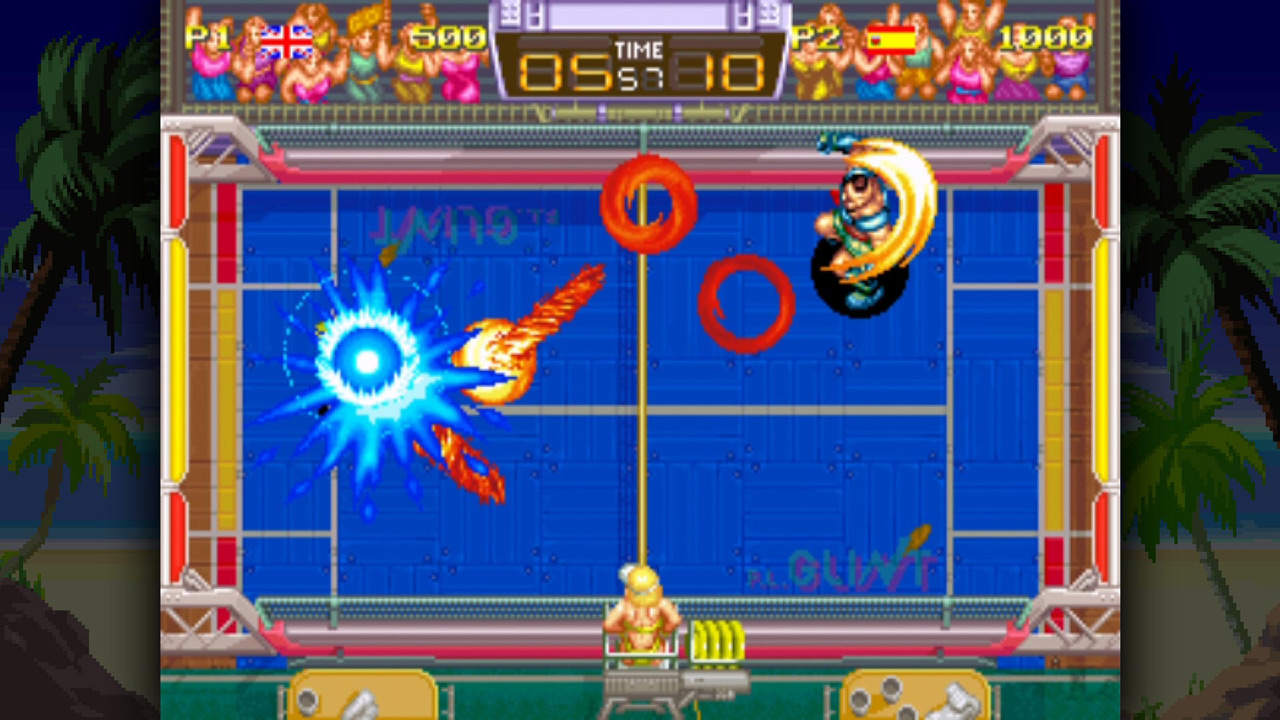 This release of Windjammers brings online competitive play for the first time. You can play online against real human opponents around the world. You can choose quick match modes or play in the ranked mode with leaderboard tables.

Whilst it is fun playing against a real opponent the gameplay did suffer from some online slowdown. Like all online games, we are at the mercy of our internet speeds.

If you want the purest form of this game stick to the arcade for single player.

There are also some fun mini-games that can be played on their own. Dog frisbee throw catch sees you throwing the disc along the beech then taking control of the dog to catch.

You have to avoid sunbathers, beach debris and catch the disc. The second game is 10-pin bowling where the ball is replaced with a throwing disc.

It’s a fun distraction and a good way to practice for when these games appear in arcade mode.

Should You Play Windjammers?

I highly recommend playing Windjammers. Its a really easy to pick up game that rewards both the casual player and the hardcore player who’s willing to learn all the moves.

The game modes provide lots to chose from and I really like local co-op couch battling with 2 Joy-Cons. Online mode has a few issues with slow down but hopefully, this can be tweaked. Windjammers is a game that really accessible to all players.

It’s a 90’s trip to the arcades full of nostalgia, minus the pocket full of 10p coins!

Fans of battling/fighting/ sports games will enjoy Windjammers. If you have played the Neo-Geo version of this game and want to experience online play then this version has it.

If you enjoy a game that allows you a quick battle then Windjammers is for you. Likewise, if you want to invest time and ‘get good’ Windjammers will reward you for your perseverance.

You’ve read our review, and maybe a few others on this title. Are you interested in getting Windjammers? Have you already played it?

About This Windjammers Review