It’s a pleasure to write our Valkyria Chronicles 4 review. I love the original game, released in 2008, but the thought of seeing another major platform release of a good iteration seemed highly improbable for the better part of a decade.

Its sequels were only on the PlayStation Portable. The ill-fated Valkyria Revolution, a poor rework of the original’s beloved formula into an action game, seemed to spell the series’ death on PlayStation 4.

But here we are! It’s 2018 and what should have, arguably, been Valkyria Chronicles 2 is, in fact, Valkyria Chronicles 4. The turn-based strategy gameplay returns, the story runs parallel to and advances past the original’s plot and the formula is kept intact with positive improvements made throughout.

SEGA have been on a huge upswing in recent years with many fan-favourite decisions. And whether you’re on PlayStation 4, Nintendo Switch, Xbox One or PC; We’re about to go into why Valkyria Chronicles 4 is yet another must-play out of modern SEGA’s library.

How does Valkyria Chronicles 4 play?

Once out of command points, the enemy’s turn begins, this ends the phase and the next “turn” is officially underway.

In the command room, the player puts together their team. Scouts, Shocktroopers, Engineers, Snipers, Lancers and – new to Valkyria Chronicles 4 – Grenadiers. Each with their own unique design, voice and mostly individual perks that can activate during their turn.

Each mission has a set objective – typically to capture the enemy base camp – and several fail states. The aim is to achieve the objective within the least amount of turns to achieve the highest rank at the end.

Completing missions will advance the story, provide EXP (experience points) and DCT (the game’s currency) for upgrading your troops and gear/tanks respectively. There’s so much depth in Valkyria Chronicles 4, but it’s pretty simple once you engage with it yourself.

Tactical Brilliance: The Art of Battle

Once the team has been set, it’s time to fight the Imperials. To do that, the player must position their units to deploy.

The usual deployment – save for special circumstances – involves the Hafen tank, driven by Claude Wallace (Valkyria Chronicles 4’s protagonist) in its own special “tank” space, followed by (usually) nine other spots for any mix of on-foot units.

Sometimes, there’ll be another vehicle spot for certain allies unlocked later in the game.

It’s incredibly important to consider the strengths and weaknesses of your squad as well as the map on which the battle will take place. Some maps have excellent vantage points for Snipers but leaving them in that spot at the end of their turn can make them vulnerable to Grenadier fire as those vantage points often don’t have cover from above.

Likewise, a mostly flat-ground map is well-suited to a Scout’s extended range of movement, but will probably be littered with tanks and Shocktroopers, all primed to use heavy interception fire during the player’s turn, mowing down Scouts easily unless precautions are taken.

I have an immense amount of fun figuring out how to navigate the new missions as they come, clueless as to the map and enemy troop types within. I’ve spent *hours* trying to make sure none of my troops meets a permanent death (and they can).

Then that fun is doubled as I return to those missions with my MEGA SQUAD, with millions of EXP invested in them using their first-promotion class types (that occur when a unit type reaches level 11) to steam-roll the enemy, supported by my recollection of the enemies and terrain.

There are a lot of talking anime heads in the game’s retelling of a story from a book with the occasional full-bodied cut-scene featuring lumpy character animations that do not impress.

That said, the game is still beautiful. That cel-shaded anime art style is striking and stands the test of time without itself feeling dated. Not to mention, some of the cut-scenes – such as the surprise tank ambush – resonated with me.

But they weren’t amazing pieces of work by today’s standards. As beautiful as the game is, far too much of its presentation leans heavily on its predecessor’s innovative ideas. Ideas which were innovative an entire console generation ago. I expected a lot more fully-animated scenes. 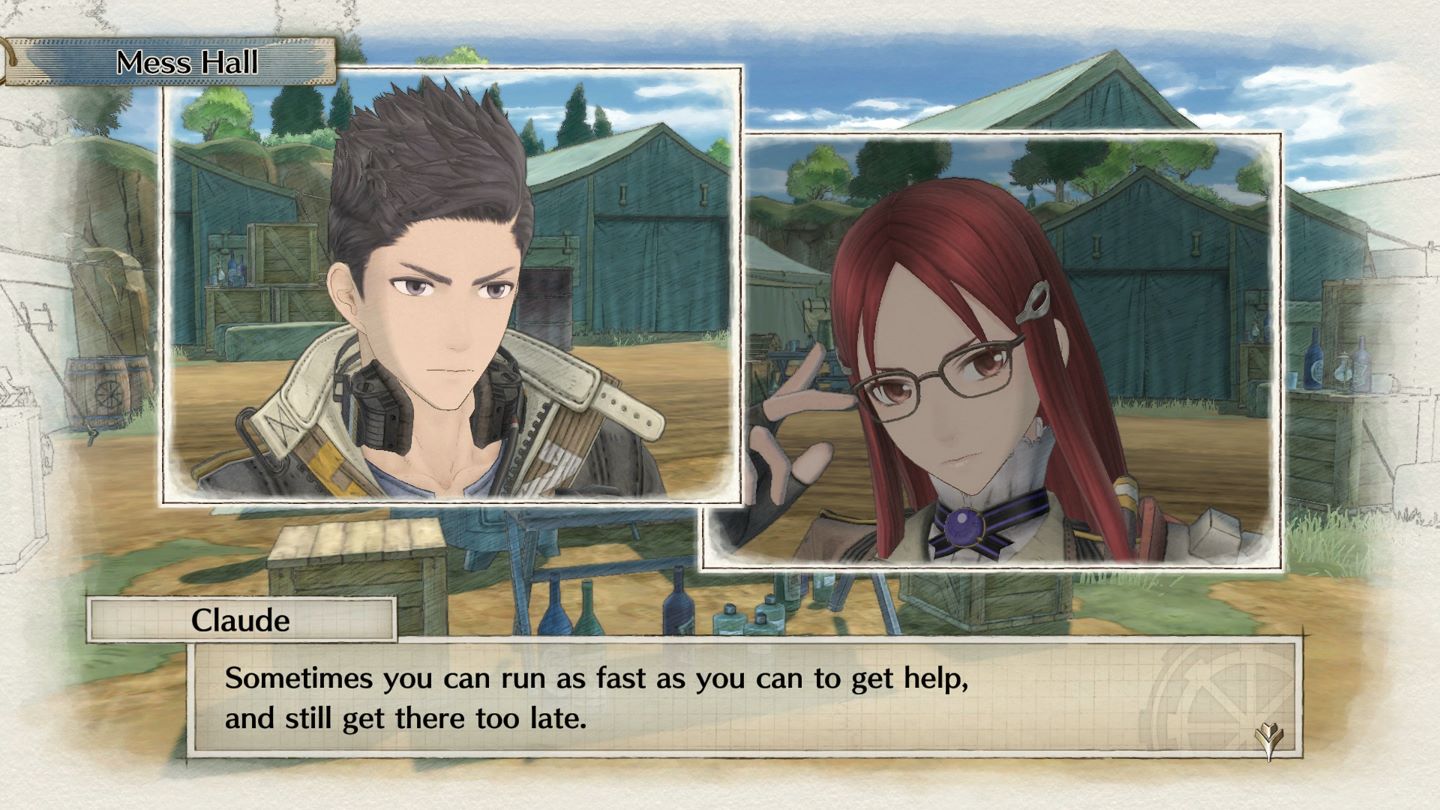 The inability to have the story auto-run in conversation. The way the game fragments its bits of story make it frustrating to sit there constantly having to press X to continue a conversation.

It comes across as unnatural and breaks the flow between characters. Though there’s an option to speed up the text accompaniment to the voice acting, there’s no option to auto-run that content.

That said, I still love Valkyria Chronicles 4 for how it looks. Each character in your squad feels individual, from their voices to their looks. The environments feel lived-in, from pristine towns to war-torn battlegrounds. It’s easy to forgive a few personal nuisances when it’s just so damn gorgeous and finely-crafted. 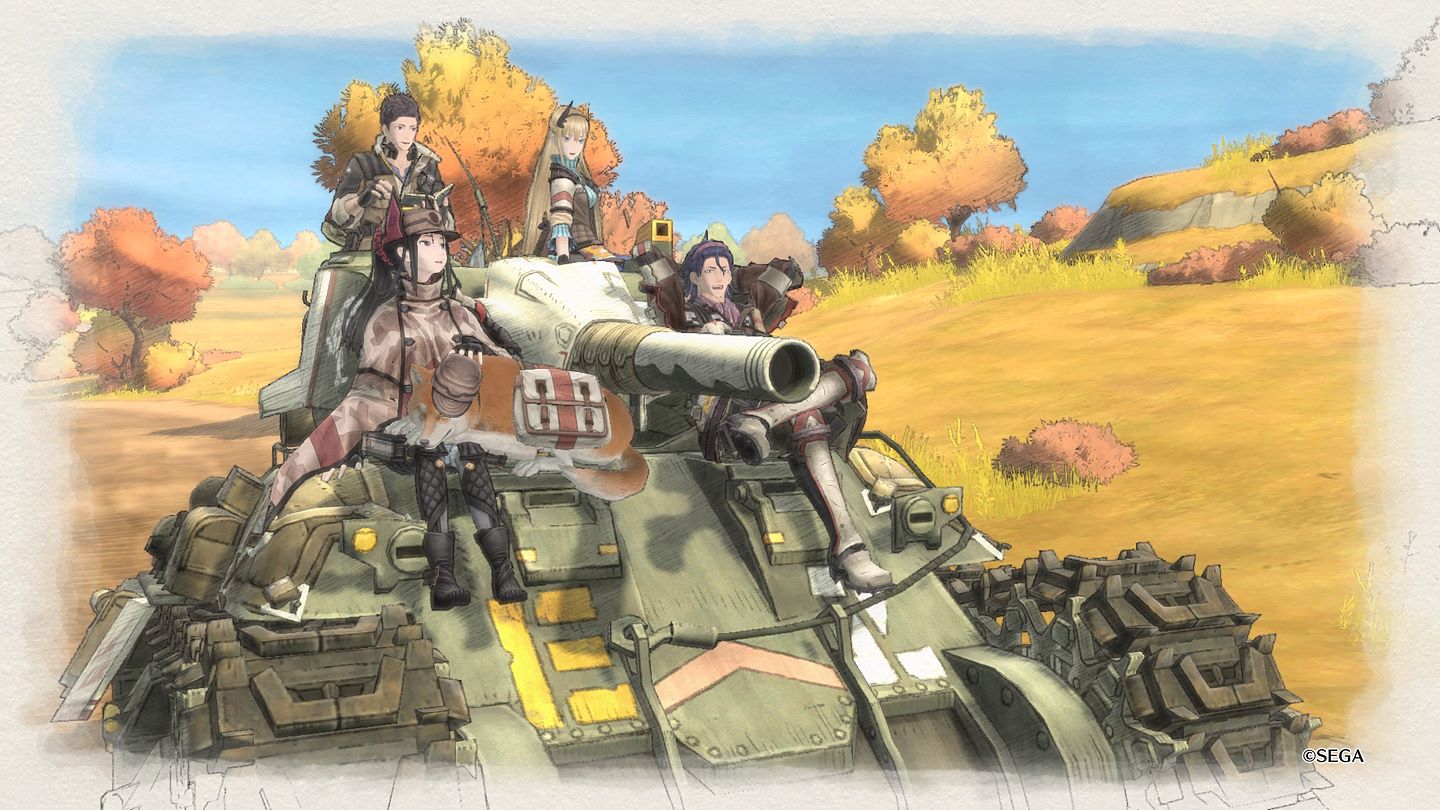 The main component of Valkyria Chronicles 4 is its “Book Mode”. Book Mode takes players through the story of Squad E. Claude Wallace takes the fight to the invading Imperial army with his hard-headed friend Raz, fragile but trustworthy tank pilot Miles and the Federation’s elite Sniper; “Deadeye” Kai Schuler as main characters.

More, equally important and prominent allies are met along the way, but the story of Squad E’s “Operation Northern Cross” is the main bulk, featuring their battles with the enemy as well as nature in a fantastical re-imagining of World War II.

Valkyria Chronicles 4 has a plot that drags in the beginning, and I do dislike how little the characters themselves (mostly) develop save for a few key moments, but as a whole, I think the story is fantastic.

It kicks into high gear in the latter half and has a far more interesting group of antagonists than the original game did, of which the events are taking place parallel to the events of 4. 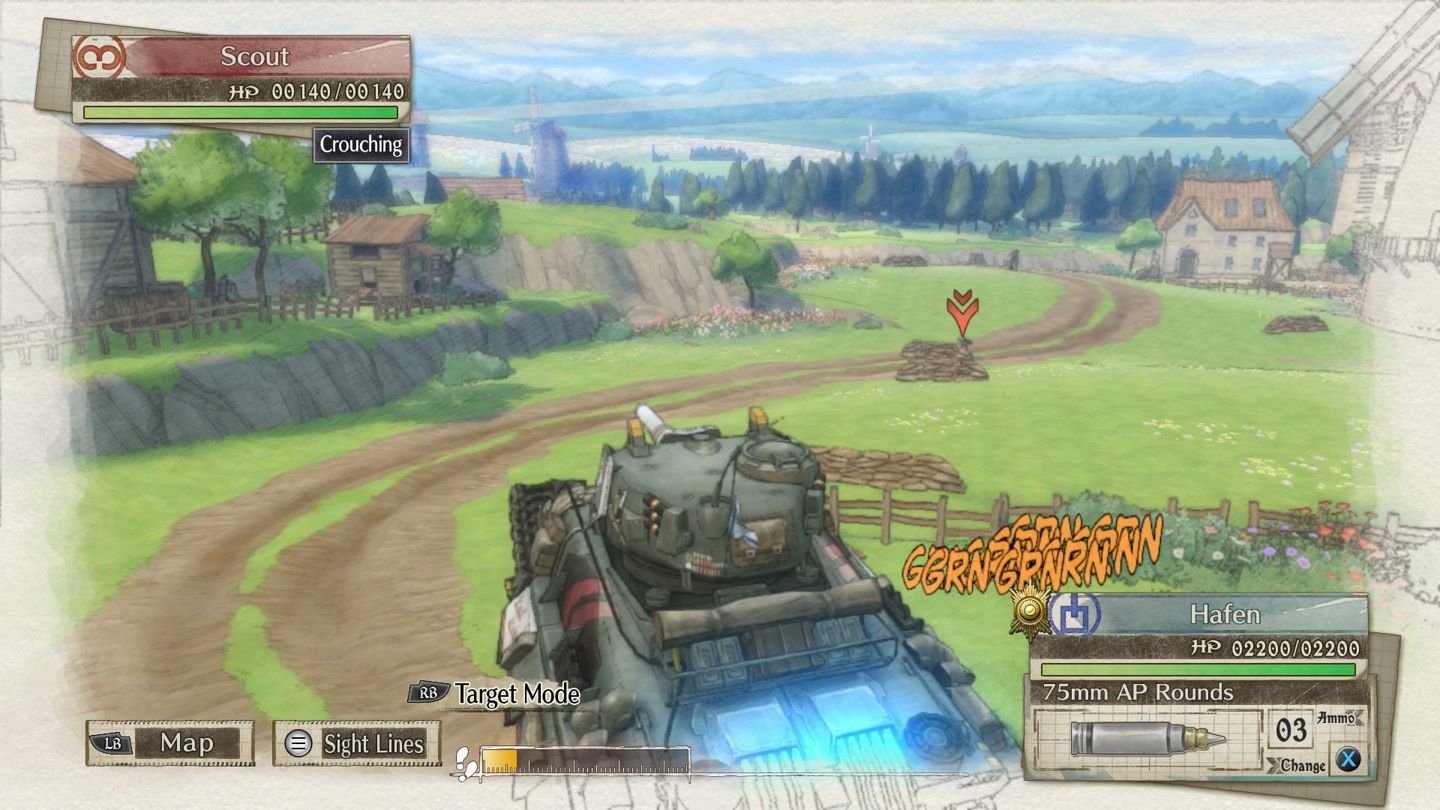 If you ever tire of the main story or just need to grind out a bit of experience, the Skirmish Mode is available. But if the cast of characters are what keeps bringing you back to Squad E.

Squad Stories is a new inclusion. Provided you’ve deployed squad members that like each other to the battlefield enough times, they’ll have individual side-stories to explore. This new mode really helps to flesh out the rest of the squad given that Claude, Kai, Raz and Riley are the main focus throughout the actual story.

Upon completion of Valkyria Chronicles 4, a wealth of post-game content opens up. New missions become available, harder versions of old missions can be enjoyed, dead squad members can be returned to life for some DCT and the Infirmary opens up; offering new unlockables for the new “Renown” currency – earned through achieving high grades in missions.

The Infirmary allows for the level cap of each unit type to be raised by 10 – unlocking a new promotion for them at level 21 – as well as other key features that extend the game’s life beyond its already-meaty campaign.

Should You Play Valkyria Chronicles 4?

Valkyria Chronicles 4 is a great game. The story is slow to start but grips by the end. Claude and Squad E are, for the most part, well-acted and engaging.

I have my issues with how minor the improvements are over the space of a decade, but I’m glad to see the series back on the right track.

Coupled with my enthusiasm for the new mechanics, including the special “Command” ability that leaders have to drag slow-moving units with them on their turn and I have barely a single complaint.

Turn-based strategy games are few and far between. Valkyria Chronicles is a shining example of timeless art married to strategic gameplay.

I truly believe Valkyria Chronicles 4 can be for everyone, but mostly for the patient players. One mistake can end a mission and force a retry after hours of progress (don’t leave the Hafen’s radiator exposed!).

Don’t be turned off by the “4” in the name either. Valkyria Chronicles 4 does not require any other material to be understood. This standalone gem does so on its own merits.

You’ve read our review, and maybe a few others on this title. Are you interested in getting Valkyria Chronicles 4? Have you already played it?

About This VALKYRIA CHRONICLES 4 Review