SteamWorld Dig 2 is the latest game from Image and Form International in the Steamworld Series. It follows the story from the much praised SteamWorld Dig also Coming To Nintendo Switch Soon. You play as Dot a steambot who’s on a mission to find what happened to Rusty the hero of the first game. The game follows the familiar style of the original and sits firmly in the genre of Metroid’ Terraria and Castlevania games. As you’ll see from my SteamWorld Dig 2 review Nintendo Switch gamers are in for a great time.

It’s a single player mining game, with platforming and exploring. The main ingredient is digging your way into the ground, finding riches, upgrading your gear and repeating whilst defending deeper into the depths. Buts what new in the series?

How many references to media or gaming/easter eggs did you find in the game?”

How does SteamWorld Dig 2 play? 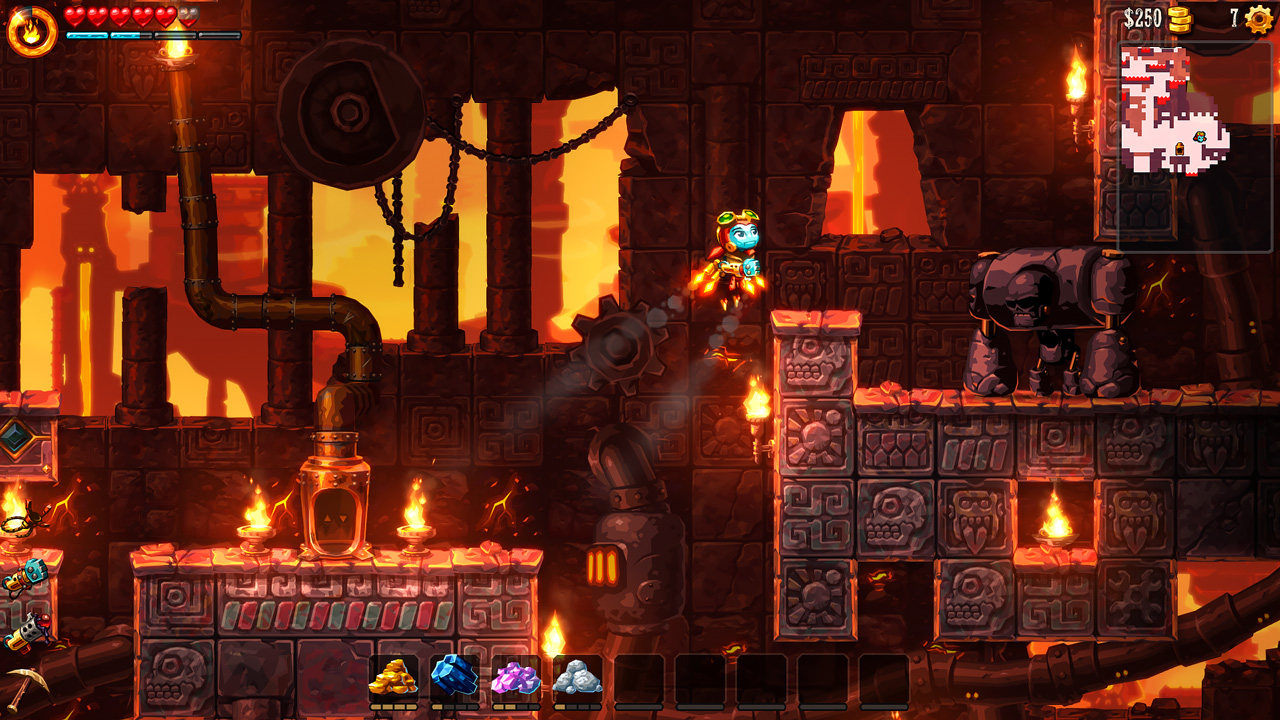 Steamworld Dig 2 literally follows on from the first game and includes a lot of the mechanics. As ‘Dot’ descends into the nether she must mine her way towards riches which in turn allow purchase of newer tools and equipment. The exploration and platforming elements are strong in this game and care must be taken to ensure you don’t become trapped and can’t climb out.

I liked the ‘light’ system which is a basic timer which reduces the visible area around ‘Dot’. However, this doesn’t stop you continuing to work in the dark (with its risks!), I felt it encouraged me to return to surface, sell my riches and upgrade my gear. The platforming element of the game is one I really like.

As ‘Dot’ digs her way down she creates a series of platforms that allow further exploration. The story experience is solid and I felt immediately on board with the whole ‘let’s find Rusty’ part of the story. Controls are the same as first game, on the Switch it worked seamlessly in handheld mode and also with the pro controller (which I prefer!).

I really liked that ‘Image and Form International’ built on the best parts of the first game and also included some new ideas. I do DIG this game!!! 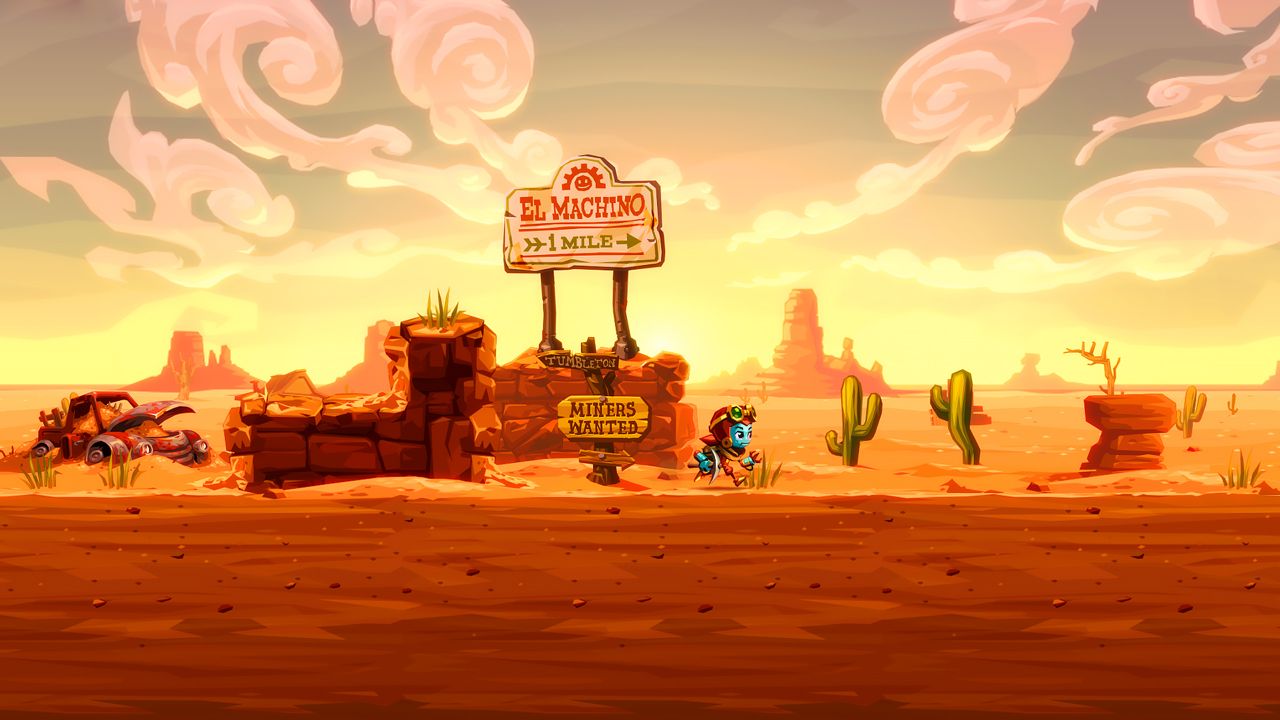 SteamWorld Dig 2 really looks nice as a game, the backgrounds are detailed and the characters you meet further enrich the whole ‘Steambot’ look to the game. I really enjoyed the different environments and their differing critters as ‘Dot’ digs deeper into the game.

The animations and character details are crisp and pay homage to a 16bit era with a HD spin. In handheld mode and on TV mode the game is practically identical in graphics. Frame rates remain at 60FPS during the handheld and TV experience.

The textures and very cool lighting effects really add to the atmosphere. The game menus that control your selling and buying of riches and gear are well organised logically and a dream to use. Overall this game looks good and really delivers a unique themed playing experience.

As mentioned early the main feature of this game is digging, excavation or mining! As ‘Dot’ you must dig your way downwards on a mission to try and find ‘Rusty’. During you’re delving you come across hidden technology that will upgrade her abilities.

I like the pacing of how the story matches the unlocking of core upgrades. For example, unlocking the jet engine would have been wasted too early in the game and it felt right when I entered huge open caverns. One of the other story mechanics that I liked were the transport tubes.

These allow quick travel once you have unblocked them from being full of mining debris (which really pleases the steambots in town. The ‘create your own platform’ mechanic allows you to direct ‘Dot’ towards the resources she needs, but poor planning may mean they are out of the reach of your pickaxe.

One part of the game that I felt sometimes left me wanting more was the restriction of being only able to use one ability at a time. For example, you can’t jump and use your pickaxe at the same time to mine a slightly out of reach resource. I can’t help but to think that this is a deliberate decision to limit access to the areas and resources early in the game.

The single player story encourages you to send ‘Dot’ deeper into the ground to explore and uncover riches whilst at the same time doing tasks for the steambots in town. I found the character of the Mayor rather amusing as he was always putting a commercial spin on everything he asks you to do. A separate collectable ‘Cogs’ is used to customise ‘Dot’ as she levels up.

Blueprints can be collected by gathering hidden collectibles that have to be dug-up and taken to a antiquities dealer in town. I really liked the customisation system which borrows heavily from the ‘Steamworld Hiest’ and I enjoyed switching around ‘Dots’ setup based on what the environment and task required. I found this game really hard to put down and soon I had found I had notched up several hours of gameplay.

The pacing and difficulty level of ‘Steamworld Dig 2’ felt just about right and it could be increased to be harder if required (you will have to find that in game!). In the first game I often had to use the self-destruct button to respawn in town as found I could climb back out!

I recently found out that the design of the depths is carefully planned by level designers whereas the first game had procedural creation of the underground layouts. I like this as it meant more tricks, traps and puzzles to solve. I was pleased that I didn’t have to do this often in ‘Steamworld Dig 2’.

Did I mention Boss fights? oh, yep there included and I won’t spoil them, for me they really ticked the boxes for the genre. I really liked that I could pick up and putdown this game as often as I needed and it really suited both long and short gaming sessions.

I figure that the whole story will take between 5 and 10 hours to complete depending on how much time you spend exploring. Overall the game is a rewarding experience.

I really enjoyed the collecting of antiquities and discovering of secret areas in Steamworld Dig 2. I sometimes found that I couldn’t leave a mini cave until I had solved the devilish puzzles and found the secrets.

This is a nice diversion from the core story is an option for gamers who enjoy the “Metroid” style puzzle type mechanic. The other feature of the game I really liked was the controller HD rumble. It added atmosphere to the experience, digging, falling rocks and explosions send vibrations to your hand and seismic activity leaves your fighting to keep hold of the controller!

The other mechanic in the game that is very clever is the whole ‘gotta get some more’ mining and gathering of riches. Early in the game you will find yourself collecting riches and running out of bag storage space. This requires a trip to the surface to sell riches and empty your bags, then return to the depths and start digging again. In my opinion the cyclical nature of this process is what makes the game hard to put down.

It’s not a painful grind, it’s one I enjoyed repeating as making more cash and upgrading ‘Dot’ is very rewarding.

Yes, Steamworld Dig 2 is basically ‘Digger and better’ than its predecessor and as a fan of the whole Steamworld series I liked the direction that the second game went. New mechanics in the game made it exciting and refreshing to play and the powerful hardware of the Nintendo Switch really makes the game a joy behold.

If you’re a newcomer to series this is an opportunity to try out the Steamworld series on much more powerful hardware than before (Nintendo 3DS). So why not give it a try?

If you like puzzles, platforms and mining then you will enjoy this game. Newcomers to the series and veterans alike. Anyone who wants handheld version of Steamworld dig should definitely consider the Nintendo Switch version.

Gamers who enjoy Steamworld Dig 1, Metroid, Terraria, Mega-man, Castlevania should check out this game. The core elements of the game are all shared in Steamworld Dig 2; Mining, exploration, crafting, fights, boss fights and platforming are all here!

About This Steamworld Dig 2 Review