Overcooked 2 is a zany party style game that supports local and online multiplayer for up to 4 people. Here you’ll be running a restaurant by preparing, cooking, delivering and cleaning up afterwards. Sounds an awful lot like what I did with dinner before doing this Overcooked 2 review!

This is a rather unique game by Team17 and developed by Ghost Town Games. Overcooked 2, much like the very popular original, could be described as cooperative kitchen simulation maybe? I’m not sure, but whatever you class the game as, it’s different and enjoyable.

If you’ve played the original then you will find some most welcomed changes in this sequel. The biggest change is multiplayer online play support. Find out more about what’s on the menu in Overcooked 2 below. (Oh, and more cooking puns are complimentary with your order.)

How does Overcooked 2 play?

Overcooked 2 plays like an episode or Gordon Ramsey’s Kitchen Nightmare! An ever increasing order list of meals appears at the top of the screen and your team of chefs have to prepare by chopping or cooking the ingredients.

The assemble the ingredients onto a plate and deliver it to the counter for customers. This mechanic sounds quite simple in theory but the old proverb of “too many cooks spoil the broth’ stands true.

I first played Overcooked 2 in single player campaign mode and was surprised to see that I had to control multiple chefs at the same time by switching between them! This game is a task juggling machine that will make your brain ache and at the same time increase your heart rate.

After one game I felt quite exhausted and after completing the level I felt some relief! Only to have to go and do it all again with more complex kitchens, different preparation methods and more complicated meals to deliver. 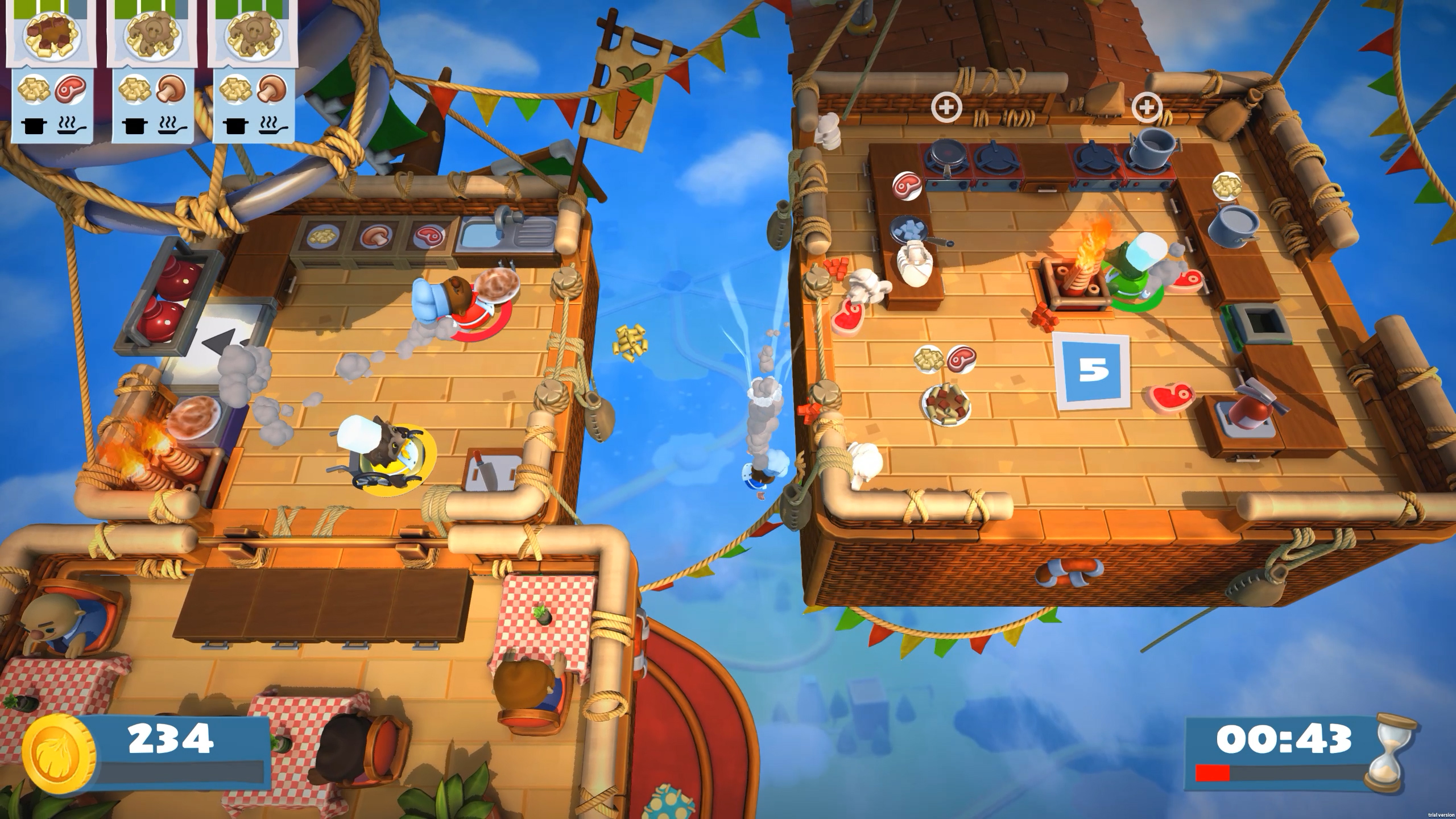 Playing in couch mode with 4 player chefs is where the game is meant to be played. After gathering a few test subjects that I tried a few levels. I don’t think I’ve shouted this much playing a computer game since I last played ‘Snipper Clips’ on the Nintendo Switch.

The nature of Overcooked 2 is that tutorial is limited and you only get a brief ingredient list at the beginning of the level. The rest you have to rely on your memory for. 4 player mode certainly helps the game to be easier, however, the difficulty is to try and get your kitchen working efficiently.

As Gordon Ramsey often is found shouting at kitchen staff, I soon found myself doing the same. “Chop the veg, cook the rice, watch the rice it’s burning, I need more clean plates!”. Whatever the strategy you use to micromanage the kitchen you need to have clear communication in your team.

Depending on what you like in computer gaming you may enjoy the party gaming style or truly hate it.

Overcooked 2 has a cute graphical style that reminded me of plants vs zombies. The undead bread doesn’t look that scary and the chefs just don’t look stressed enough.

On the Xbox One, Overcooked 2 runs at a stable 1080p with no frame rate issues unlike some of the other formats that struggle to maintain a constant playable frame rate. It’s hard not to like the cutesy graphical style with the inhabitants of Onion Kingdom and Kevin the barking dog.

But under the fun looking graphics is quite a challenging game. 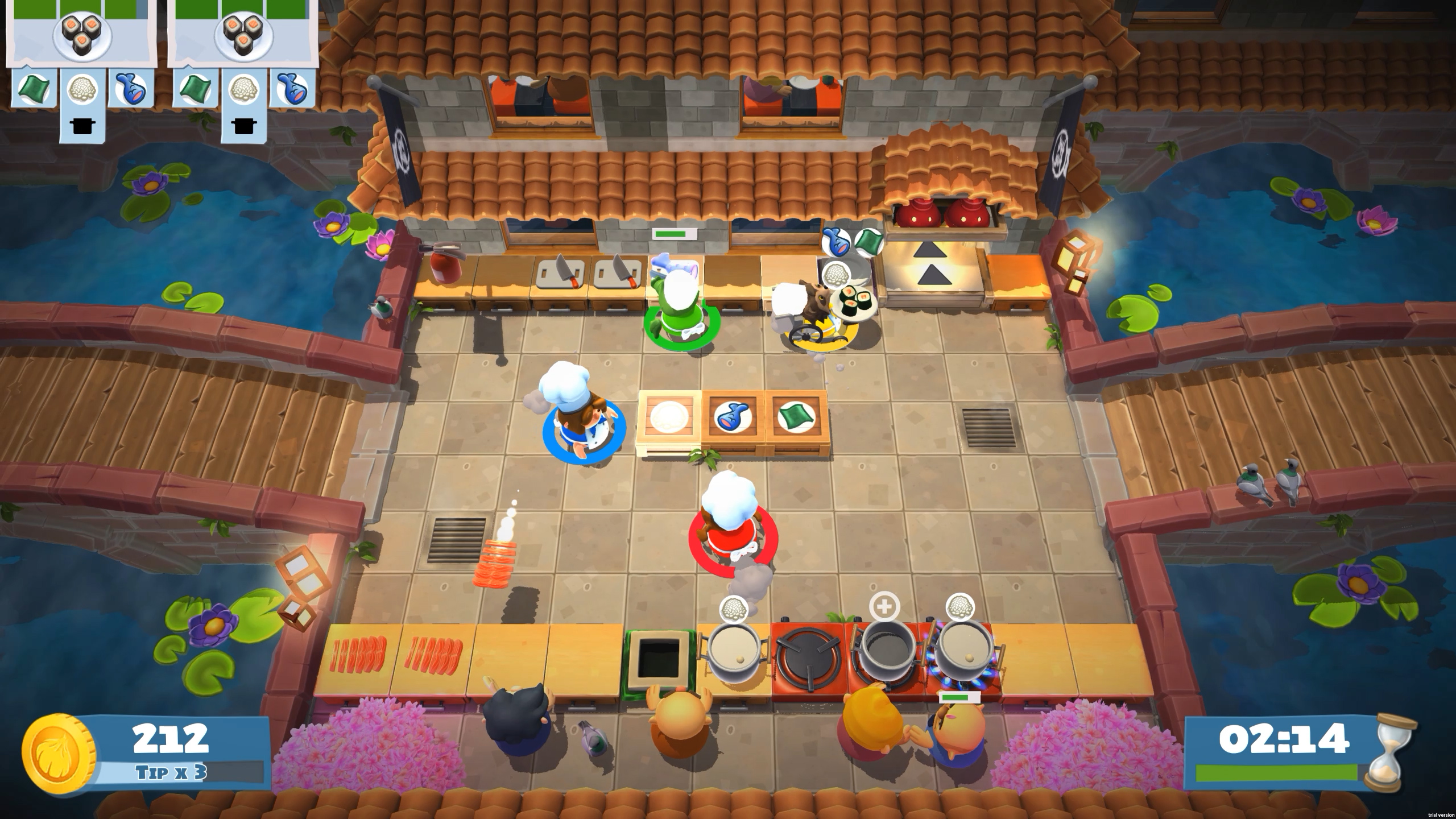 As discussed earlier the main mode for Overcooked 2 is the story campaign. You can either play this solo or via local couch mode (4 players on the same Xbox one and screen). The standard method of controlling your chef is by using one controller each.

However, if you don’t have 4 controllers you can share 2 controllers. This sharing method doesn’t really help at all and only increased the difficulty of the game.

My advice would be to only play couch mode with a controller for each player. The difficulty and complexity of recipes and kitchen layouts have a gradual learning curve that would suit most gamers and those who are new to the franchise.

Single Player VS Playing Together

The single player mode is a really special kind of kitchen hell, where you have to time-share several chefs. For example, you set one chopping veg and switch to another chef to cook some rice. Whilst this mode is included I don’t think the developers want you to play this way.

The game style is better suited to multiplayer cooperative play. Single player is not much fun. If you wish to play the story mode in online mode you need to have a group of players ready to invite from your friend list.

There is no drop-in mode where you can assemble your kitchen team from randoms.

However, my experience of this mode wasn’t that enjoyable. More than often the level selected was one I hadn’t reached in the story mode. This meant I was unfamiliar with the kitchen layout, didn’t know how to assemble the ingredients and consequently I was left wandering about.

After a few minutes, it was obvious that I didn’t know what I was doing and would be kicked from the group. Now here lies the inherent problem. If you don’t have a group to play with online or on the couch you can’t progress in the story and gain familiarity to enjoy the arcade mode.

There are other additional game modes including versus mode where you play in teams of two in the same kitchen. I didn’t have the opportunity to try this during the review.

Should You Play Overcooked 2?

Overcooked 2 feels more like a remake of the original game than a complete game on its own. I honestly feel that the developer has used this version of the game to address some of the issues that were present in the first game.

Overcooked 2 feels like a much more rounded game with a friendlier learning curve and most importantly story mode online play support. In addition, there are 40+ more levels to play along with a very sneaky hidden level mode where you have to meet the requirements to unlock them. Unfortunately, you’re not told how to unlock these levels, I didn’t find any.

If you are a fan of simulation games, party games or process driven game that have time constraints you will enjoy the challenge of Overcooked 2.

The multiplayer couch mode is one of the best parts of the game and if you get a group of mates around you’re in for a fun evening of shouting and laughs. If you have played the original game you will still find value and enjoyment in Overcooked 2 with its better multiplayer support and new levels.

You’ve read our review, and maybe a few others on this title. Are you interested in getting Overcooked 2? Have you already played it?

About This Overcooked 2 Review