We head back to both the 1940s and 2011 with this remaster of a classic game from Rockstar. I have some very fond memories of this title that dared to be different in many ways. Taking the open word action format, and mixing in some point-and-click style traditions. I was more than ready to play again for this LA Noire review based on the Nintendo Switch version of the game.

Make no mistake, this game is not a typical Rockstar production. You are the law this time, not all about breaking it. You have to investigate to find clues, interview witnesses, and decide if they are telling the truth or not.

I loved this game, I’ve really enjoyed going back to it. It’s not for everyone, however so hopefully this review will help you decide if it suits you. Especially if you have a Nintendo Switch, although the game is on both PS4 and Xbox One too.

How does LA Noire play?

L.A Noire is a true hybrid of an open world action title and a traditional adventure game in many ways. The gameplay involves driving an open world, set in Los Angeles in the 1940s.

Playing as Detective Cole Phelps, you take on cases which involve investigating crime scenes for clues. Then interviewing witnesses and suspects, getting all the information you can from them.

On face value, it’s rather straightforward. But the best part of this gameplay is all in the interactions between the characters. Even for its time, the facial capture for LA Noire was outstanding, and it still holds up now.

This all comes into play as you interview people. Asking questions from your notebook will see them produce some kind of answer. But, is it true? Are they telling you everything they know? This is for you to decide.

As the player you watch their facial movements, see if they are looking away, pulling a strange expression. Anything to suggest it’s not the truth. This remains from the original and it really makes every question feel like it matters.

The latter, however, needs backing up with evidence from the clues you have found during your investigations. More on those in a moment.

I really enjoyed this element of the game, it makes you feel like a real investigator. It’s very much like an interactive cutscene and won’t suit all gamers. But I’d you love a good mystery and the chance to play Detective, it’s excellent. 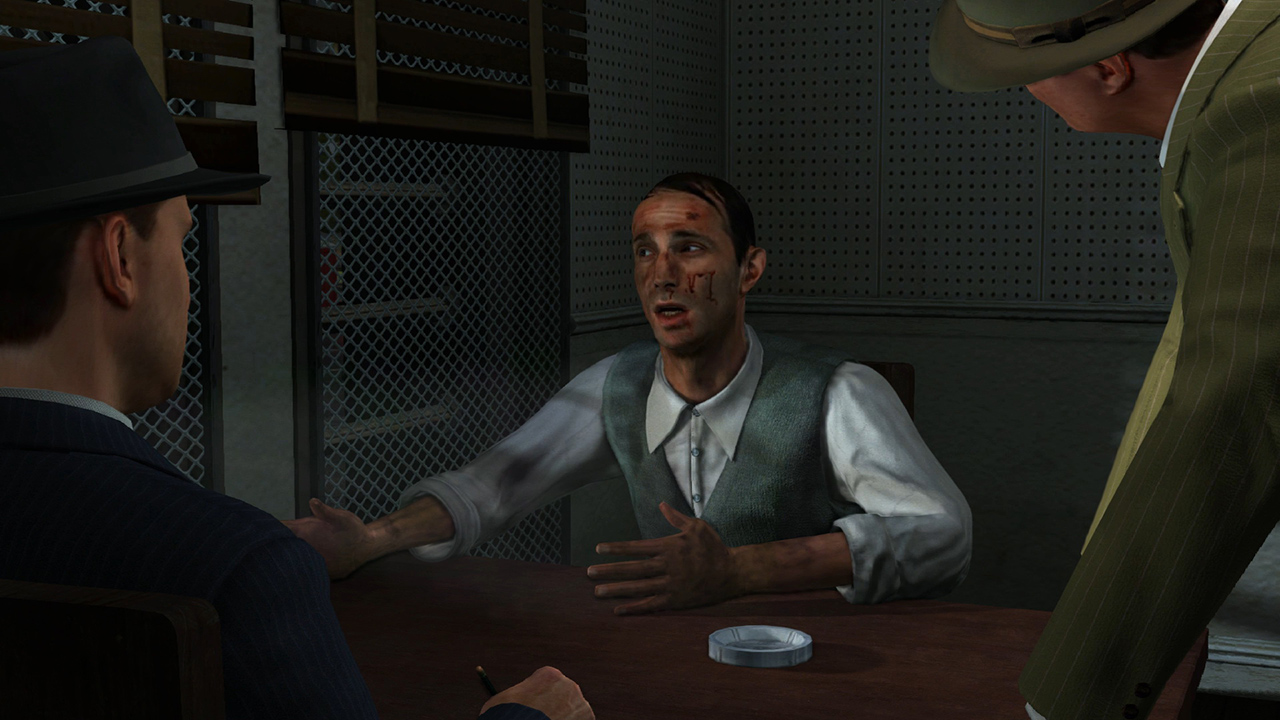 Cole Phelps starts out as a young member of the police after World War II. Soon he rises to Detective starting out in Traffic, taking on cases involving car incidents. You do progress through different departments during the game however as your reputation increases as an investigator.

Regardless of the type of crime you are investigating, you are going to crime scenes and finding out what happened.

You search for clues while investigation music plays in the background. Once you find all the clues the music has a nice little crescendo moment before stopping.

If you are struggling you can use intuition points earned to mark them on your map instead. It does feel a bit of a cheat though… Not that I would ever cheat just to get EVERY clue!

But the main point of the LA Noire gameplay is that you can enjoy the game at any level of gamer. There are the other options like these throughout the game to keep the story moving for people who are less familiar with games.

Particularly where you can skip some action sequences if you find them difficult.

For people that like that kind of thing there are plenty of shootouts, hostage situations where you need to take out the criminal before the hostage is lost and chases in your car and on foot.

It’s all a really nice balance of different styles and it’s very much like being a true detective. It’s got something for everyone to enjoy, but the pace will either really work for you or it will put you off completely. 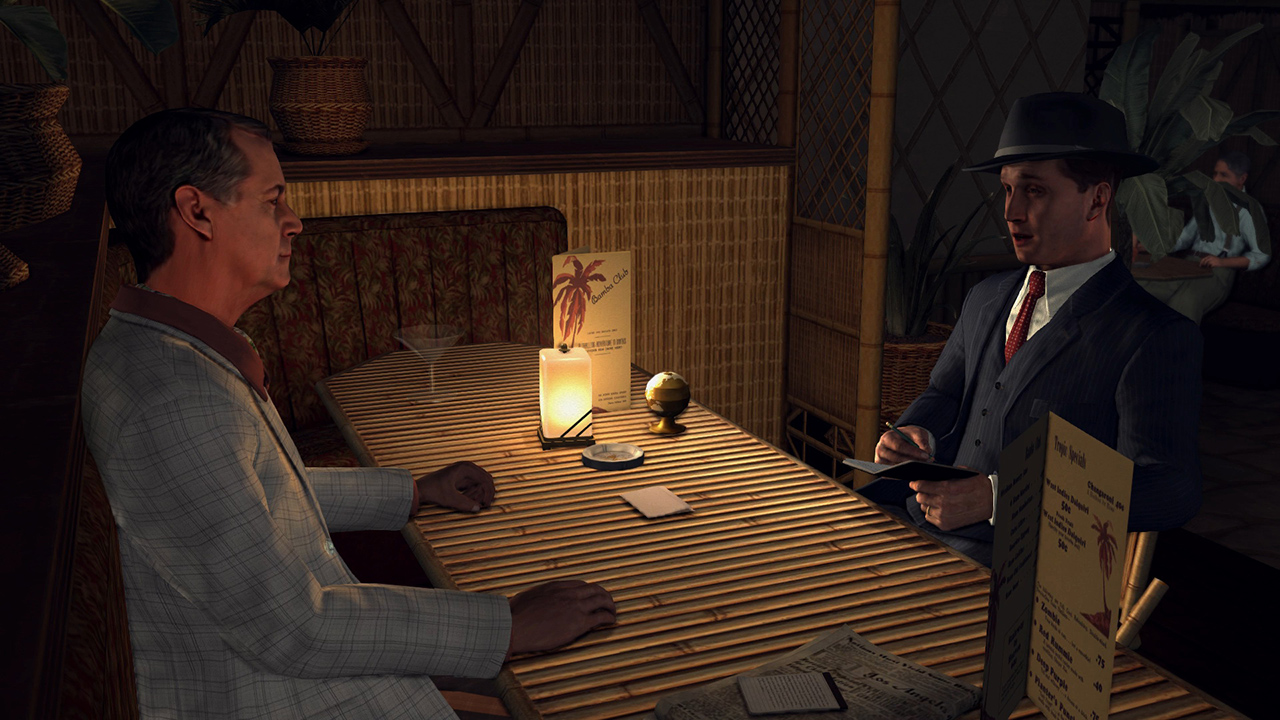 Back when L.A Noire originally released the motion capture of facial expressions was hugely praised. But with times moving on with the likes of Uncharted 4 and The Last of Us taking it to new levels, does it still work?

Yes is the answer. They’ve done a really impressive job at updating the graphics engine to modern standards. The game is very impressive when you are interviewing suspects and in interrogations. In fact, the closer you get the more impressive it is.

The world itself looks amazing too, with the open world getting added detail and impressive design for 1940s L.A. The Switch does have its limitations in this area though, the slowdown and dropped frames come in at times. Especially when moving from inside a building to the open world.

But it’s not an issue that really makes a huge difference, it’s just a little disappointing.

The characters, locations and vehicles are all wonderfully designed. The voice acting is outstanding too and it has a classic soundtrack in there too. Overall, a great job has been done here, the Switch almost copes with it but on other formats, it’s likely to run extremely smoothly. 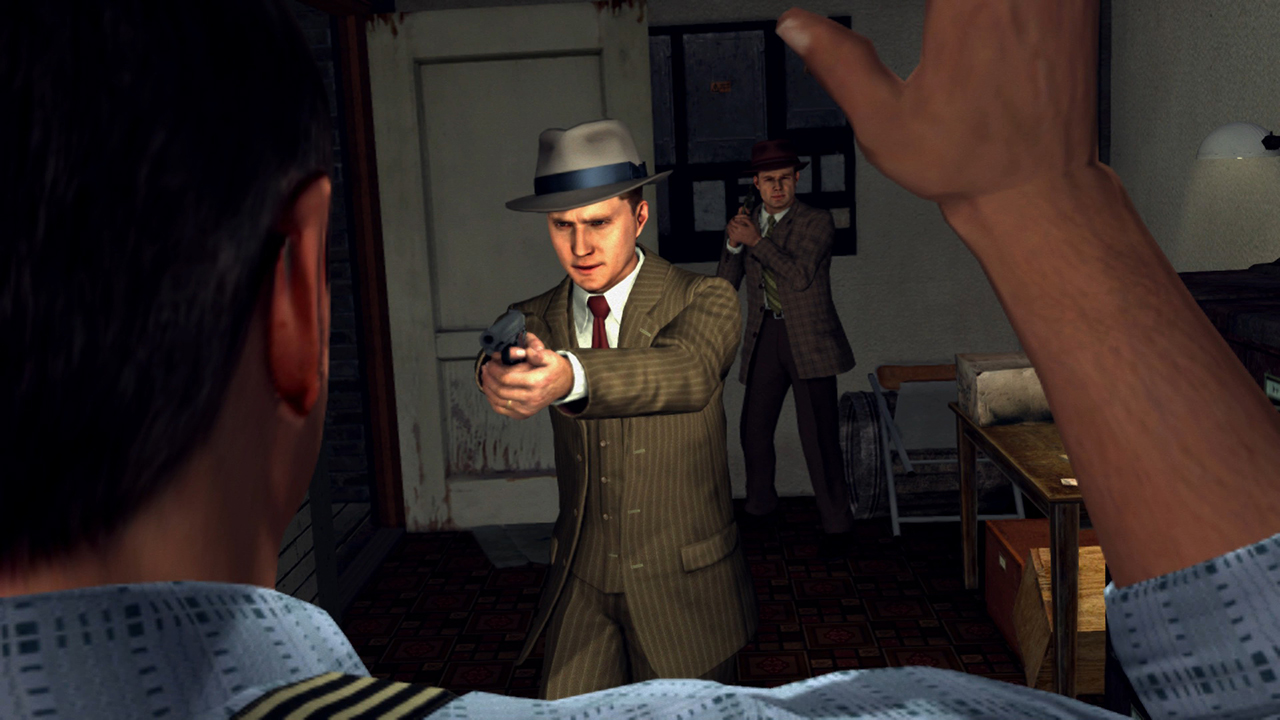 L.A. Noire is all about the main storyline. One that sees you rise through the ranks as Cole Phelps. He shows his abilities early in the game by solving a number of crimes, with you deciding the fate of those accused.

Soon he digs into something bigger, a wider crime that he maybe should have kept out of. Things get dangerous as you find out more and you soon realise there is a very dark side to L.A.

With side missions in the form of street crimes popping up and taking a more detailed approach to how these play out. They are missable too, so when they pop up they will be gone once you change roles so certainly make them worth taking on.

What I did find really enjoyable is the DLC content that is included here with L.A. Noire remastered that I never played. These are additional cases for all of Phelps different roles. So if you missed them first time, there are some surprises for returning players.

The story is the main driver here, and when you consider you can get your deductions very right or very wrong, you’ll be coming back for more.

Should You Play LA Noire on Nintendo Switch?

It’s a tough one for me now because I love this game. On a more subjective review, I may give it a higher rating. It looks great, has interesting storylines and is so well performed. Solving crimes is addictive and it feels so good to get those interviews right and find all the clues.

But the pace is not what you expect of a Rockstar game traditionally. It’s a mix of open world setting with those point-and-click mechanics. You find things you need, speak to people and use them to solve what happened.

That will work for you or it won’t. This does not stop the game from being really, really good for the audience it suits. It’s a classic, a game well worth anyone giving a chance and a unique experience.

Fans of Telltale games will be at home here. Same goes if you liked any of the Frogwares Sherlock Holmes games or Mafia type adventure games. There is action, not as much as you expect of a Rockstar game but it has hints of Red Dead in it’s shooting mechanics too.

Enter some positives, negatives about the game below in the first two columns respectively. Plus, note any bugs you experienced in the right column. Keep it reasonably brief.

You’ve read our review, and maybe a few others on this title. Are you interested in getting LA Noire? Have you already played it?

About This LA Noire Review