GRIP Combat Racing is a high octane-fueled arcade racer with split screen 2 player and multiple online modes. Whilst this game is heavily inspired by the 90’s title Rollcage there is plenty to enjoy in this game.

Developed by Caged Element games and produced by Wired Productions. GRIP has racing, combat and destruction ranging across 22 different tracks. There are 15 different cars that are unlockable and a multitude of customisation options.

Each of the different powers up and weapons bring a whole plethora of destruction and tactics to GRIP. The game soundtrack is inspired by many fully licensed Drum and Bass artists.

How does GRIP: Combat Racing play?

This would be relatively easy in most racing games, however, changes the rules. In GRIP your car can stick to walls, ceiling and pretty much any transitional surface between the two.

The cars themselves reminded me of the radio controlled cars of the 90’s that used drive along, flip over and drive upside down, climb up walls and bounce along across any terrain. Each corner has huge oversized wheels that allow driving upside down!

If you were to take the car physics from games like Rocket League and Trackmania and combine them with tracks from Wipeout and Fast RMX.

Then take a smidgen of Mario Kart with its item pickup battling and boosts boxes. Then stick it all in a blender you might get something like GRIP: Combat Racing.

One thing GRIP does really well is the circuit design. Whilst Mario Kart Deluxe 8 has you racing upside down on parts of the track, GRIP has you racing on pretty much any surface that you can get your wheels on.

Some of the circuits have sections where you need to swap between walls, ceilings and somewhere in between the lot!

There are obstacles on the circuits that will cause destruction to your car and ramps that send you spinning across the sky. I really liked how GRIP challenges you to stick to any surface you can race on.

But it does not end there.

Each car has a boost ability that turns on a huge jet engine on the rear of the car. This can be used to control the car like a jet plane to literally keep you airborne.

So how does the car feel whilst driving? Well… As I mentioned it earlier it feels like a crazy flip radio controlled car crossed with the speed and acceleration of a drag racing car.

The controls are easy to master, with boost buttons, handbrake for j-turns and drifting. The analogue stick controls direction and the shoulder buttons control speed and power up abilities.

I played GRIP with both the Pro Controller and the Joy-cons in both handheld and TV docked mode. I did find that both controllers felt slightly delayed and that sometimes I found myself struggling to react to hazards on the track.

Feedback via the Rumble HD was next to non-existent apart from when my car ended up glitched into the terrain. I tried adjusting the levels of feedback and it made no difference. From a controllability, perspective GRIP was a very frustrating experience that I hope is addressed by a patch soon.

I didn’t like the way that speed was represented in a tactile way via the controller, I didn’t get any feedback to suggest a loss of grip, transfer to different surfaces and landing. 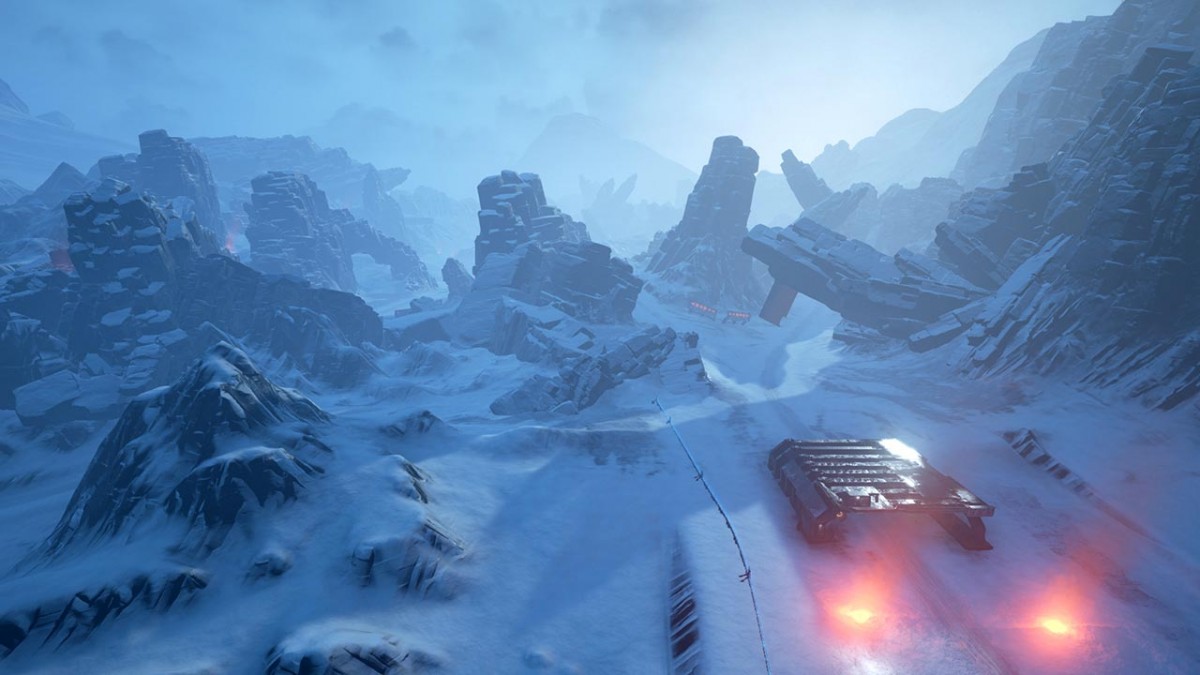 Graphically GRIP: Combat Racing on the Nintendo Switch has some graphical performance issues when it is compared to the other more powerful consoles like PS4 and Xbox One that share the release.

Whilst graphically GRIP is playable it doesn’t quite look as pretty as the preview videos, trailers or the photos that were released prior to launch. Whilst playing GRIP in TV mode I had a whole bucket load of graphical presentation issues thrown at me.

The switch version feels poorly optimised. I understand that patch is being worked on by the developer to rectify this. However, within the scope of this review, I didn’t get to verify this as the patch wasn’t delivered within the review timescales.

I can’t help feeling that GRIP could be great, it could be amazing. However the performance and aesthetic content have made it fall well below the expectations for a delivered game. 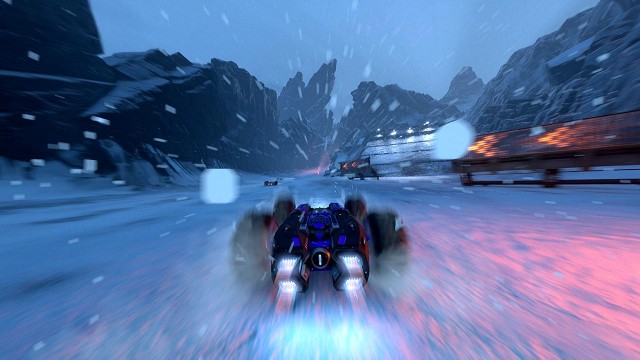 At the time of reviewing the frame rate was inconsistent with some complete slowdown, collision detection was off. I also felt that blur was being used excessively to overemphasise speed and this made the background/foreground and other vehicles washed out.

I can’t 100 % confirm the screen resolutions but it felt lower than 720p. Distance objects popped up and out of the display.

I tried adjusting the graphical setting to remove the blur and grain effect and couldn’t really find a happy medium apart from setting everything to the same as a black and white TV. The menu text and in-game text is really hard to read in TV mode.

In handheld mode or stood upright in desk mode the smaller display of the Switch does seem slightly better than on TV, but I still had issues with font size.

From the perspective of in-game view, there were several times that I had to reset the closeness of behind car camera. Strangely when boosting it would shift the camera perspective out requiring me to reset it back.

One time for my car became embedded in the rocks, the screen went from bright to dark in slow motion leaving me wondering what to do. If you crash (which you will do) sometimes you put back in a position that you can’t be successful from.

This might be just before a jump or dangerous terrain. This is very frustrating as your opponents speed away. 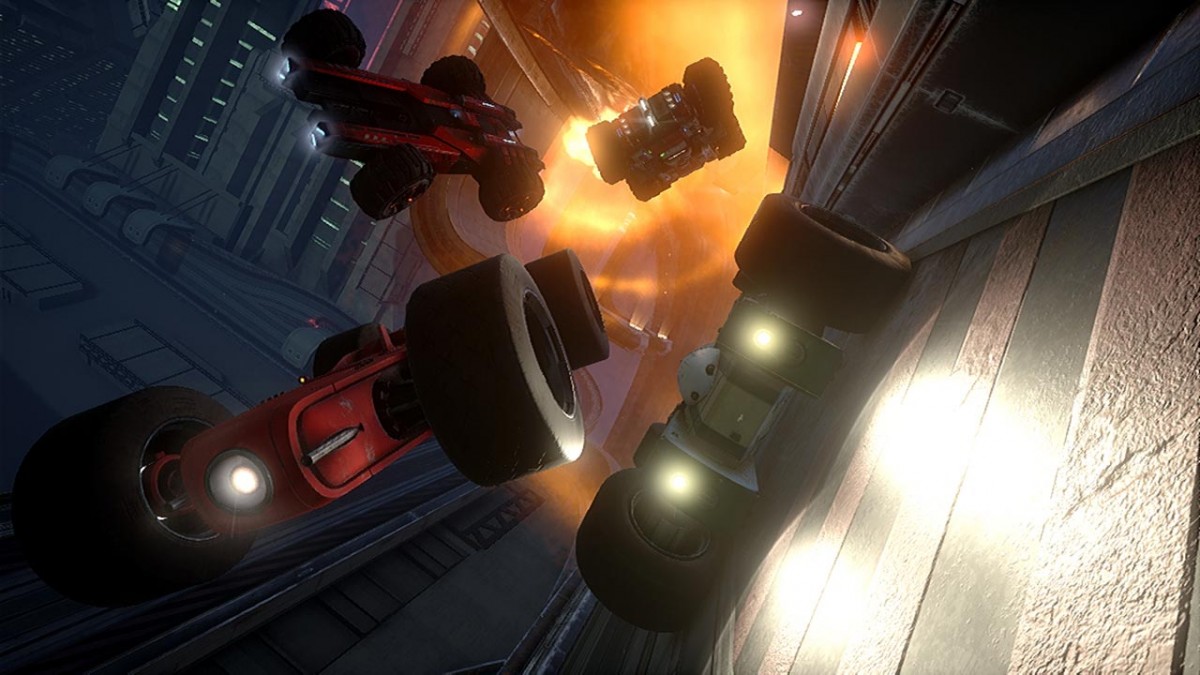 If you are thinking of trying the split screen mode which has some really cool images of 4 players.

The Nintendo Switch only will offer local 2 player split screen play. I also found that it was necessary to choose if I wanted horizontal or vertical screen splits before I picked multiplayer.

As changing this during a race, tournament or Deathmatch split will not change the orientation. You can save the setting to a different orientation but it makes no difference in the game! I can’t really say anything positive on how well the game looks in 2 players.

I could go on for longer about the presentation of GRIP: Combat Racing, but I think you get the point. There are no doubt more issues that will need addressing in a patch from the developers to smooth out this game post-launch.

GRIP Combat Racing has a multitude of game modes. I found the best place to start was the Campaign mode as it was a good introduction to all the different styles of racing and destruction.

The local split-screen mode is 2 player instead of 4 players which the screenshots imply. The single-player mode is your drop in and race mode which doesn’t have the time commitments of campaign modes.

Carkour (parkour for cars) is very like the stunt mode free-drive present in Trackmania. Where you have to get around the track without failing jumps or obstacles. It’s more like a puzzle mode.

I can’t say I really enjoyed this mode as it was very unforgiving with the default cars. There is also online competition modes with leaderboards and tournament options, just like campaign mode but with real opponents.

However, during the review, I was unable to find any online opponents so I can’t comment on the online experience. I was never able to get past the network synchronisation screen. 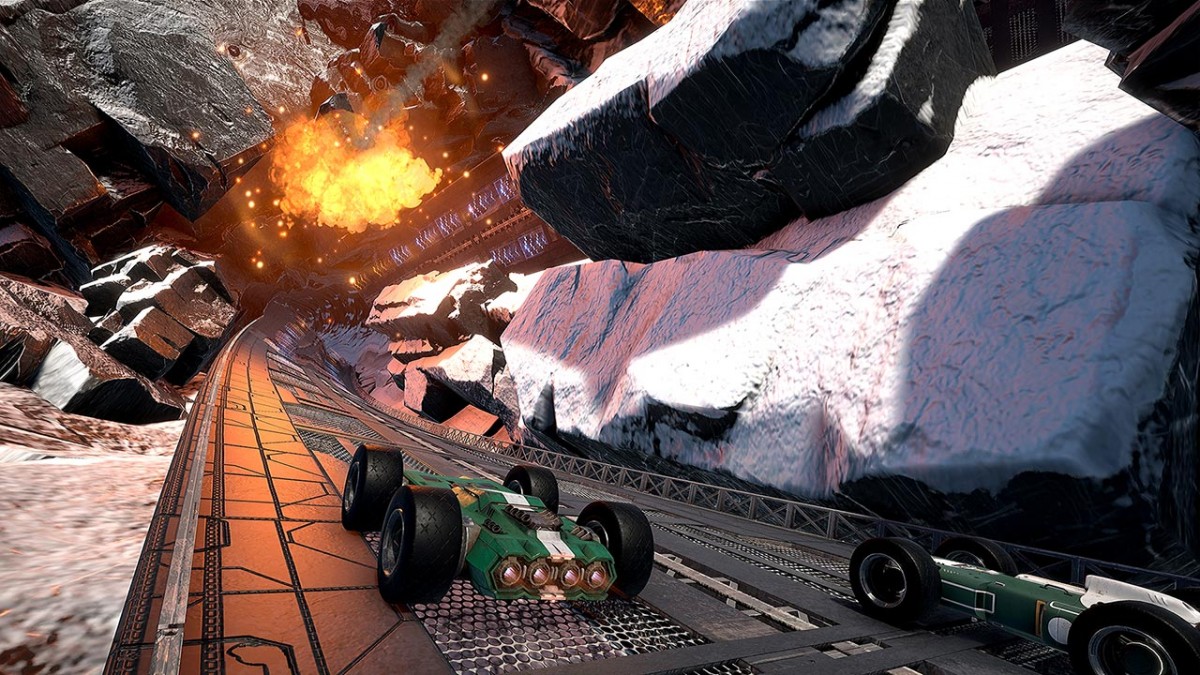 There are a lot of different game modes in GRIP: Combat Racing, with different rule sets and objectives. Many of these modes are only accessible in certain game modes.

Race mode has the following modes:

Arena Mode has the following modes:

Carkour mode has only mode and objective. Grab the collectables whilst navigating the puzzle course of twists, loops, jumps and other nasty obstacles.

All the above modes are accessible in online, private online, local split-screen and single-player mode.

Should You Play GRIP?

I really wish that I could recommend GRIP Combat Racing at launch. It means well, but at the current moment, it has a lot of unsolved problematic issues that really affect its value for money and playability on the Nintendo Switch Version.

If you can accept this and are willing to continue then I hope that you will find it worthwhile. Alternatively, you could wait for me to come back to this review after a patch has been released and I can tell you more.

Gamers who would suit GRIP

As I mentioned earlier in the review you can find aspects of Mario Kart, Trackmania, Burnout, Wipeout, Fast RMX, Rollcage and Destruction Derby. But the current unfinished state of GRIP: Combat Racing will most likely cause a lot of contempt with any Gamer.

You’ve read our review, and maybe a few others on this title. Are you interested in getting GAME NAME? Have you already played it?

About This GRIP: Combat Racing Review