A long time ago back in the ancient days of 2011, Bandai Namco released a sports game on the Nintendo Wii. Titled ‘Go Vacation‘, this wonderfully average ‘minigame game’ met with wonderfully average review scores and… that was that, really. After all, it was just a budget sports resort game.

Now that budget sports resort game is back, having been given another chance at life on the popular Nintendo Switch. Does this game still hold up? Does it still feel fun seven years later?

Not really to be honest. It’s a game kids may enjoy, but I can’t see too many other reasons to play it if you don’t have any! Find out if it’s for you in my full Go Vacation review below.

How does Go Vacation play?

It may be a bit hard to believe, but I did have fun with this game. It’s not a good game, but it’s fun and has a certain charm.

Everything had a simple control scheme in both the ‘open world’ and the minigames, mostly being around a couple of buttons to control your character. Being a game that’s probably suited more towards children, this is understandable.

However, I had two annoying problems with the controls. The first being that looking around is not mapped to the right analogue stick. Nope, to move the camera, you have to hold the left bumper and then move the left analogue stick.

So you can’t run and sightsee at the same time. It’s a ridiculous idea and incredibly annoying when practically every game has the camera mapped to the right analogue stick this generation.

To add insult to injury, in the customisation menus for your character and your gear, you can actually use the right stick to rotate the character. They could manage it, they just wanted us to suffer. 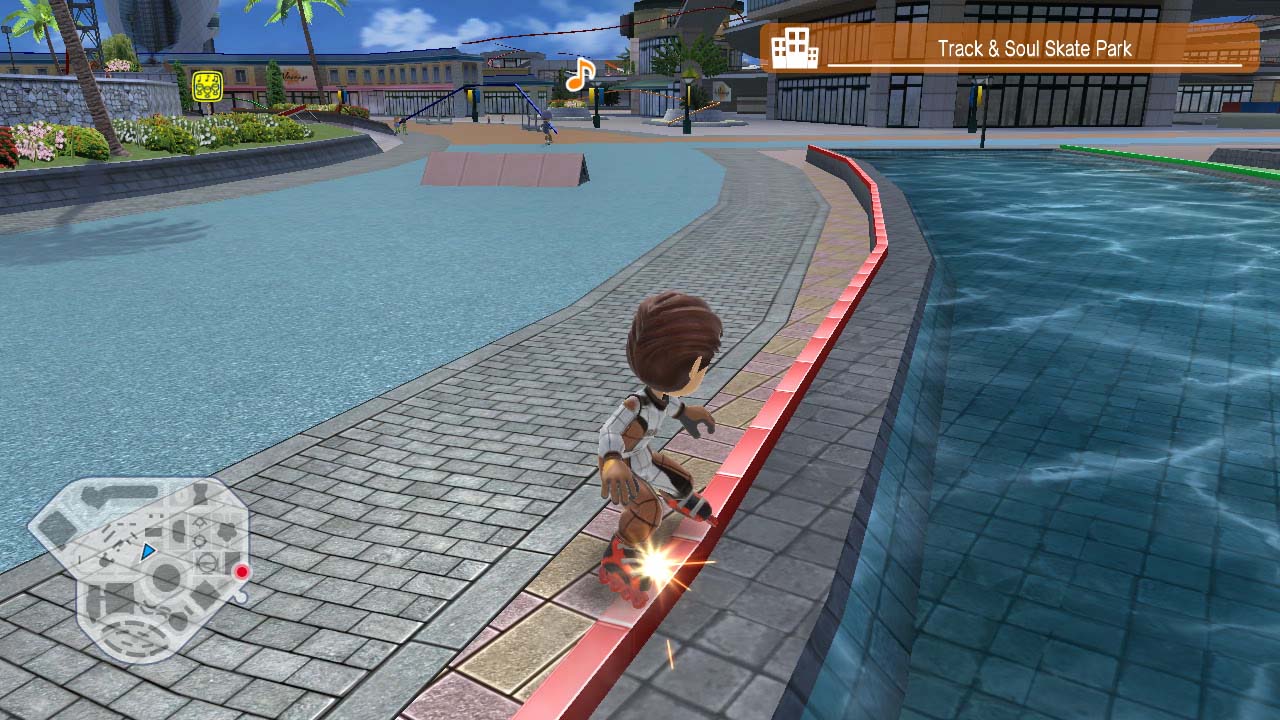 The second problem is the motion control. I played through this game with the ‘full controls’ option activated. Which means no motion controls. I was pretty annoyed when a good few of the minigames required me to still shake my controller like a baby having a temper tantrum.

Skateboarding, as one example of many, required me to do tricks to earn points. You can use the bumpers to do certain types of tricks, but then the others required actual bodily movement.

Sure, it’s a trivial thing, but I specifically chose the ‘full controls’ option so I wouldn’t be risking the life of my beautiful 55″ 4K OLED TV when I was playing the minigames. 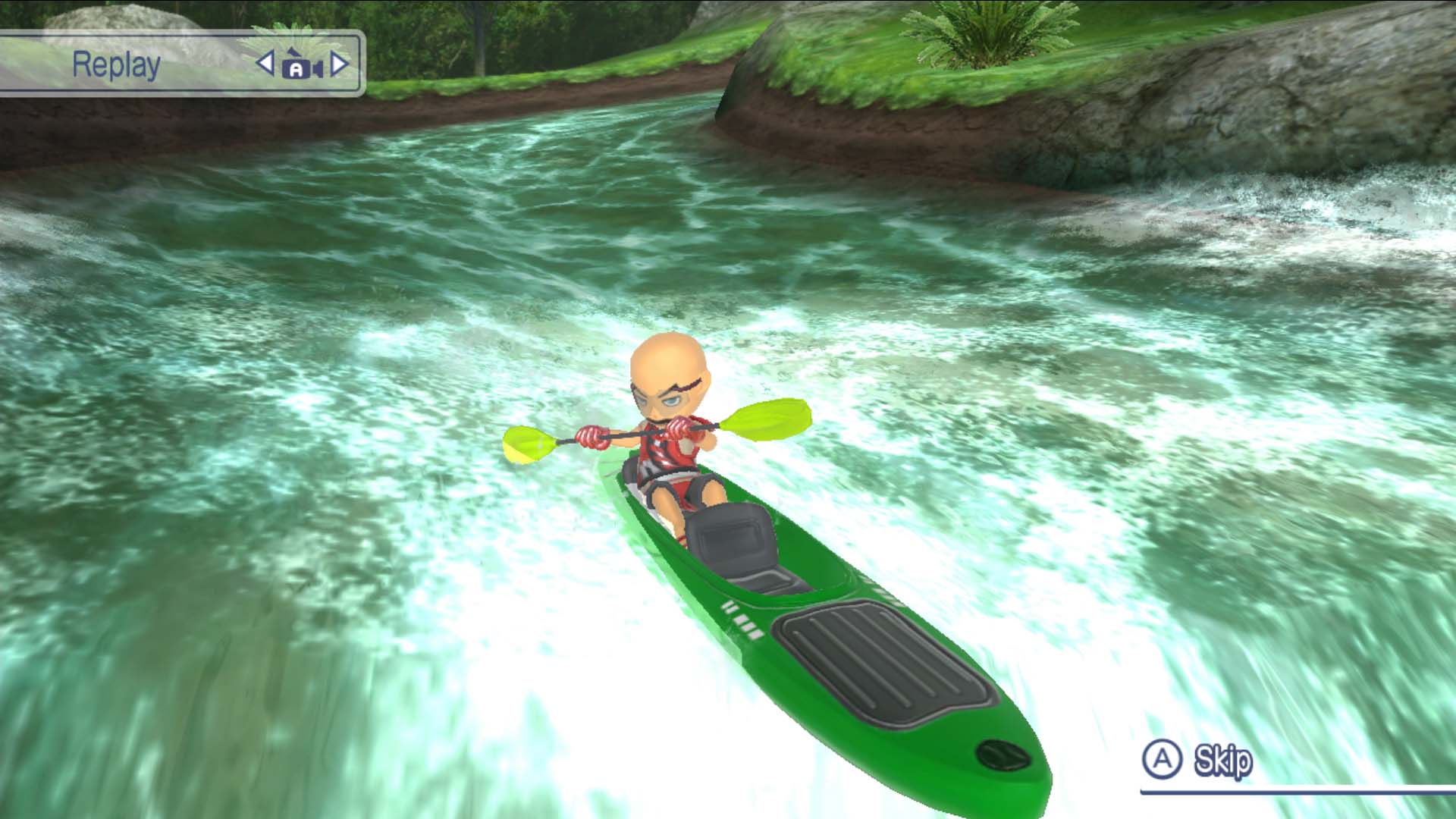 It’s a seven-year-old game, so don’t go in expecting much. It does, however, have a sort of aged charm to it. It looks old, sure, but it ends up adding to the experience in a way.

It’s a game full of minigames, it doesn’t have to look amazing. Most likely the people playing are kids and/or drunk adults at family gatherings anyway!

Transitioning from TV mode to handheld mode, nothing seemed to be compromised. It’s not a very demanding game so this makes sense. In either mode, I never had any framerate issues or performance problems.

The music in this game sort of has a weird situation. Most of what you hear is basic and almost childlike, but that only seems to be in some minigames and when NPC’s are talking to you. A lot of the time while I was exploring the resorts, it was a bit too quiet for my liking. There was no ambient music so it came off as a bit eerie.

The Snow Resort has music that’s clearly supposed to be playing through speakers, but the singer and the music don’t match each other at all and it sounds out of tune and weird! 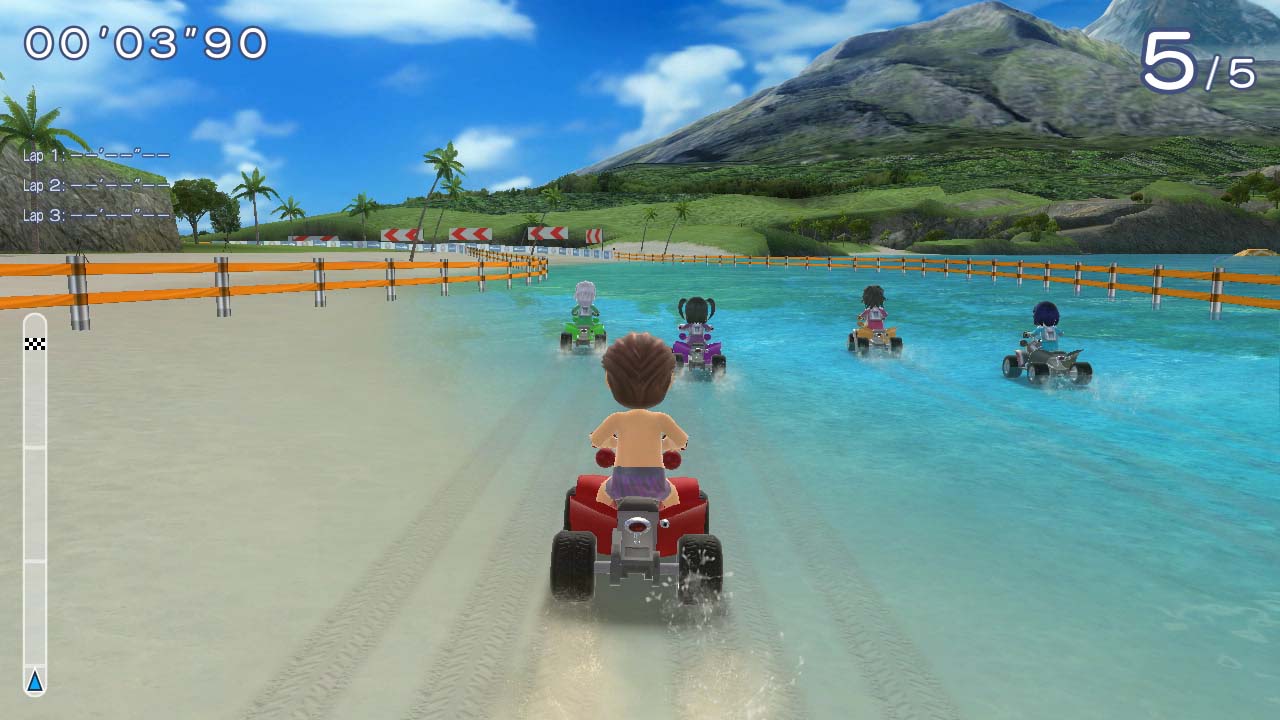 Go Vacation only features minigames. It has no story, no main goal other than to just have fun around the resort and play minigames.

It’s a good little game to play when you’re short on time but want to just play a quick game of something.

There are four resorts and over fifty minigames to choose from, so there will definitely be a bunch of games in there that appeal to you.

Each resort has its own set and style of minigames. The Snow Resort has snowboarding and skiing. The Mountain Resort (my personal favourite) has things like kayaking and horse riding. The City Resort is all rollerskates and skateboards and the Marine Resort has scuba diving and surfing. Not all of them are great, but you’ll find your favourites easily.

The game doesn’t stop at just minigames either. There are a bunch of other things to do in the resorts. Popping balloons for points, taking pictures of the wildlife for your album, and finding treasure are a few examples.

There are even daily challenges to beat once you’ve played all the minigames at least once. Once you reach a certain level, you get your own house that you can decorate as you please, you can unlock a lot of different decorative styles for it for even more creative freedom.

Should You Play Go Vacation?

Go Vacation is a game that has you enjoying over fifty minigames in four distinctive resorts. The game looks aged and the forced motion controls can be annoying, but they can be overlooked in the overall experience.

It’s not the best game, but its charming and fun, and isn’t that what games are all about?

Mostly, children, I imagine, but people who also enjoy minigames and chilling on virtual holidays. Also, anyone who enjoys the Mario Party games, and things like the old Viva Pinata Party Animals game.

It would make a good family gathering game too, especially with drinks involved.

I definitely wouldn’t recommend buying this at full price though, wait for a sale and get it as cheap as you can. It’s fun, but not worth the full release price.

You’ve read our review, and maybe a few others on this title. Are you interested in getting Go Vacation? Have you already played it?

About This Go Vacation Review