I’m going be completely honest with you here. When the alpha for Gigantic hit, I played it, and didn’t like it. And honestly, if you asked me why I couldn’t tell you because I don’t actually remember. All I remember is that I wasn’t really feeling it. So I wasn’t the most open minded about getting on with a full Gigantic review for us here at MGL.

“But Natalie!” I hear you say, “Alphas don’t represent the final product! What you played was very early development!” I know that dear reader, and I can definitely say that I learned my lesson.

Developed by Motiga, Gigantic is a MOBA that had a rather troubled development. It saw the entire staff being laid off, but returning anyway to continue to work on the game because they believed in it. Dedication, ladies and gentlemen!

Was it all worth it, or should they have given up and accepted it was the end? Here is my review for Gigantic, and as always, drop a comment below on Disqus or Facebook and share this with all your gamer buddies.

Gigantic is a really pretty game. The colours are all bright, faded and pastel, which gives it a sort of dreamy vibe and is very aesthetically pleasing to look at. Each of the 3 maps are very distinctive in their looks, and are simply beautiful to play in. 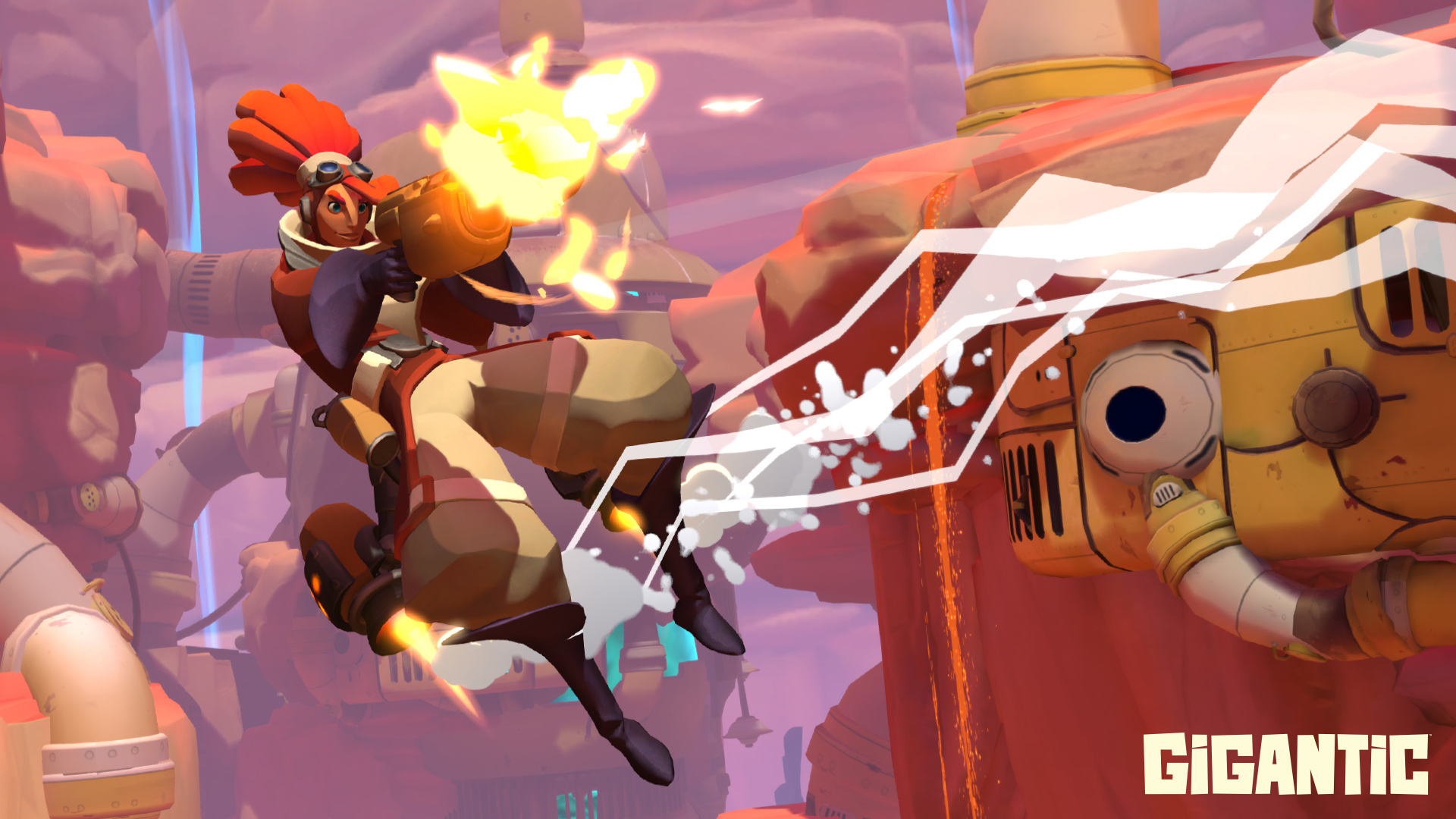 Ghost Reef is a canyon/desert type map, which as you’d expect to be full of dry oranges. But the ghosts of past sea life haunt some caves which adds some briny blue auras to the map.

Sanctum Falls has ancient ruins, which mixes the misty greys of stone walls, lush greens of grass and the autumnal oranges hues of leaves and creates a magical looking environment. Sirens Strand is foggy and has an icy cold white and blue colour combination, as well as some dark brown of shipwrecks scattered along the map to contrast the more striking colours.

For well-designed maps you need well-designed characters, which Gigantic certainly has! The art style of the characters is not too cartoony but just enough that they look different and interesting. They are also designed in the same beautiful art style of the environments. While all have different and contrasting colour palettes to each other, which makes each character stand out from all the rest.

The character design that is my favourite is Zandora. She is a badass looking pink lady with stars and space in her hair. All the characters have many unlockable skins too, so you can show your superiority to your rivals on the other team who are stuck with the defaults!

The aim of the game is to defeat the other teams guardian. To defeat the opposing guardian, you must provide your guardian with enough power to hold them down so you and your team can attack. Power can be gained from killing members of the opposing team and collecting power orbs. 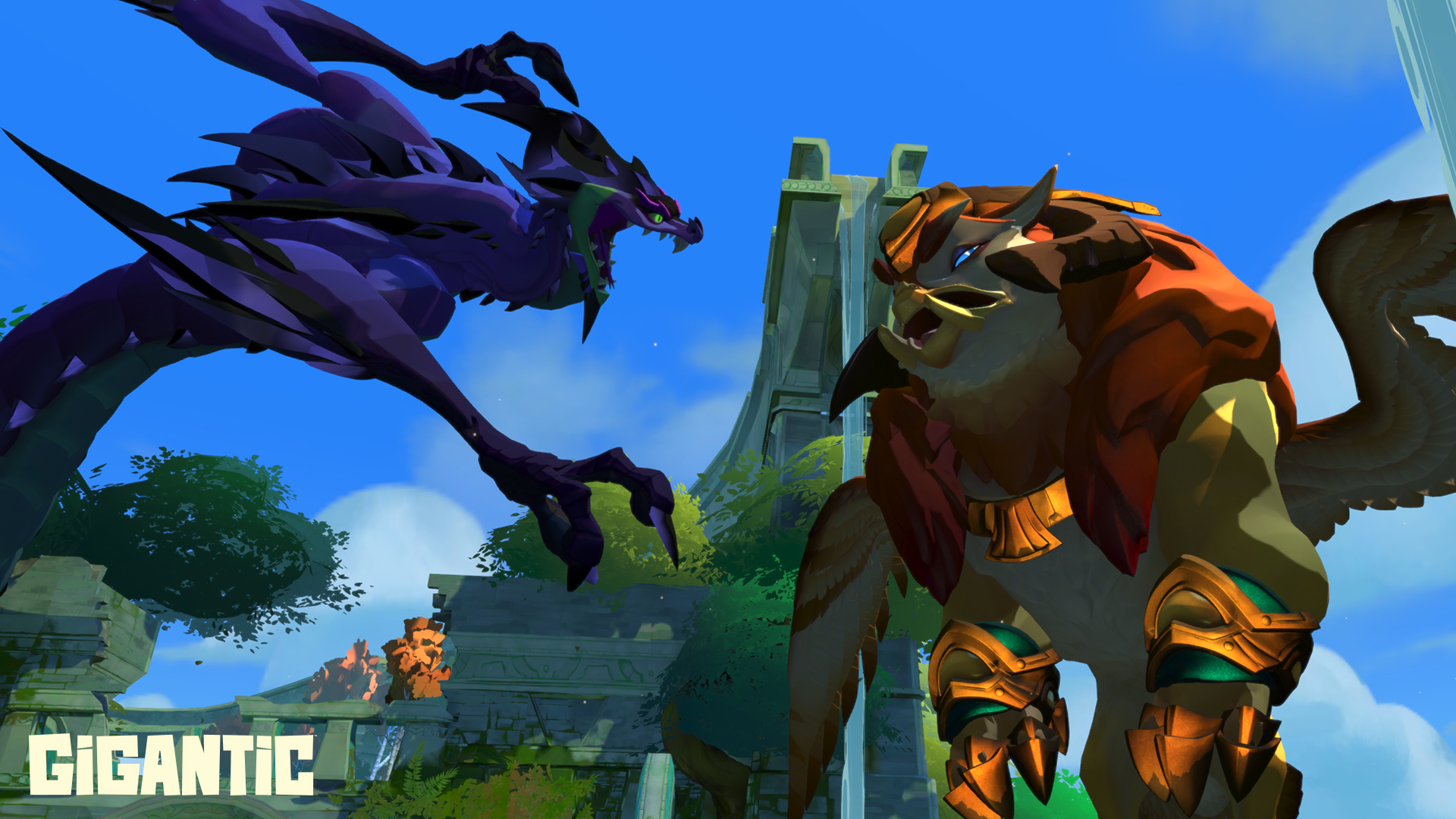 In certain areas of the map are summoning spots, which each team being able to summon creatures to guard the area and to attack if enemies get too close. If no creature is summoned, then you will have to collect the power orbs yourself. But summoned creatures will collect them for you, making summoning a very good idea if you want to efficiently win matches.

Different creatures do different things, like walling off areas against enemies and healing you and your teammates when you get close, so they’re not just used for collecting power.

Once your guardian has enough power, they will ‘rampage’. This means they will weaken the other teams guardian for a small time while you attack them. Depending on what side you’re on when a rampage happens, kills during rampage will either grant more time so you have longer to attack, or will simply defend your guardian from the opposing team.

The game is actually really easy to get the hang of, and the levelling is done well. You can either take a look at the skill tree and decide what you want your points to go on from there like usual, or choose the recommended skill by just holding down left on the d-pad.

Personally, I always choose the recommended skill, it’s quicker to select in the middle of a match and I seem to play good with the recommendations anyway.

I’m so glad I gave Gigantic another chance, I almost missed out on a great game because of some feelings over the alpha. The game is a lot of fun, and good to play both hours on end, and for a couple of matches if you just want a quick game of something.

The only negative is that with only 3 maps it can sometimes feel too repetitive, so hopefully maybe there are more maps on the way.

The game is beautiful from the visuals right down to the music, and I’m so happy that the developers over at Motiga were able to finish this awesome game through all their hardships. They were right to believe in it, and I’ve learned my lesson: Don’t judge a game by its alpha! Gigantic is FREE to download and play, so go get it right now and show Motiga some love!

About This Gigantic Review