Forgotton Anne is Anne is an Anime story-driven, 2.5D platform action/puzzle game. And is out now on the Xbox One, PS4 and PC. Honestly, if you have any of those, you should be thinking about buying this game. This amazing title comes from Square Enix Collective and developed by Throughline Games from Copenhagen Denmark. And as you’ll see in this Forgotton Anne review, it’s outstanding.

Forgotton Anne features hand-drawn characters that are animated in the Forgotten Realm. A moody world where mislaid and forgotten items from our world end up With cinematic storytelling, beautiful anime-inspired art and a soundtrack from Copenhagen Philharmonic Orchestra.

Follow my review and find out who and why Anne is forgotten.. and why you should remember to pick this up!

How does Forgotton Anne play?

Forgotton Anne is a platform exploration game with puzzles to solve, characters to meet and decisions to make. The choices you make have consequences to the story arc throughout the game.

The first part of the Forgotton Anne has detailed interactive cinematic trailer likeness. The first thing I noticed and enjoyed was how strikingly well Anne moves. Her movement reminded me of old hand drawn Disney cartoon movies, captured in gameplay.

As she climbs ladders, jumps and interacts with her environment I felt like I was being involved in an Anime movie. The game controls are simple and you are walked through the first level in a tutorial style gameplay.

The second thing I noticed was the world of the Forgotten Realm, I was blown away by the moody, dystopian, steampunk, Victorian industrial design. The level of detail is amazing and the visual world is captured in a likeness that H.G Wells could only put in words. From the onset you feel drawn into the storyline, Forgotton Anne is a work of art, a beautiful and stark adventure.

Anne certainly hasn’t forgotten her moves. She runs, jumps and climbs like Mary Poppins or Belle from the beauty and the beast. I can’t say enough about how good the animation of her movement.

You really need to see it with your own eyes.

From a controller perspective, I found the move set took a while to learn and after a short amount of time I had Anne’s moves dialled. To traverse the realm Anne must climb, jump and sometimes leap to ledges only just reached by her fingertips. The level design is clever and supplements her move set.

A few times I had to take a couple of attempts to make a jump to far building edge which only motivated me to try harder. One of the mechanics I liked is that there’s no fall to your death, which is often overused in platform games. Anne instead lands rolls and staggers to her feet.

I really liked how easily Anne is controlled and I felt intrinsically connect to the game, involved and it was almost like I was controlling an actor in the story.

Puzzle are prominent in Forgotton Anne. There plenty of variation of puzzles that fit into the story-driven gameplay. Without spoiling them I will only discuss the types.

My favourites were the sliding ball puzzles where you have to rearrange the balls in the correct hole to light up the puzzle. The main puzzles feature pipe circuits that provide energy or anima as its referred to in the Forgotten Realm.

You have to change and divert the flow to enable different mechanisms to become power such as doors, lifts, lights and mechanical apparatus. The puzzles often require lateral thinking and good dexterity to solve them within a timescale before they reset to a default state.

The puzzles provide a nice break from the gloomy story and add to the fun factor of Forgotton Anne.

The graphical detail of the Forgotten Realm and its inhabitants is really eye-opening. The 2.5D platformed world has extra depth and some amazing details.

Clever use of camera angles, depth of field blurring, silhouettes and shadow to darkness shading really paint a murky and gloomy industrial world.

The platform world of Forgotton Anne used clever perspective depths where stairs, ladders and doorways expand the world to new areas. Sometimes Anne will enter building interiors and she can be seen through exterior windows.

Clever use of the depth perspective really adds to the illusion that the world levels are more detailed and bigger.

The musical soundtrack score that accompanies the experience is performed by Copenhagen Philharmonic Orchestra. It adds to the drama, the tension and the story beautifully.

The voice acting in the game uses some interesting regional accents, which really adds to the characters and storytelling. One of the things I really liked was the use of sampling to make the communication devices sound a bit like old 1950’s radio broadcasts.

The conversations crackle and additional noise can be heard in the background. it’s details like that this adds to the drama and realism of the Forgotten Realm.

Forgotton Anne is a story-driven platform exploration game with puzzle elements. The story focusses around the forgotlings. These denizens of the realm are hand drawn objects that have become lost or forgotten and have drifted to the realm.

in the initial game intro, you see the story of a lonely sock who’s lost under a bed slipping out of the human world and arriving in the Forgotten realm as a forgetting.

You play Anne who is an enforcer, a character that is part social worker and part police detective. The main story premise is very dark and has a similar likeness to the worlds that George Orwell described in ‘Animal Farm’ and ‘1984’.

The dystopian world is going through a rebellion and you playing as Anne have to investigate this. The story has some heart pulling moments where you have to make decisions that will change the story outcomes.

You are often given a choice of 2 responses in a conversation that steer the storyline. 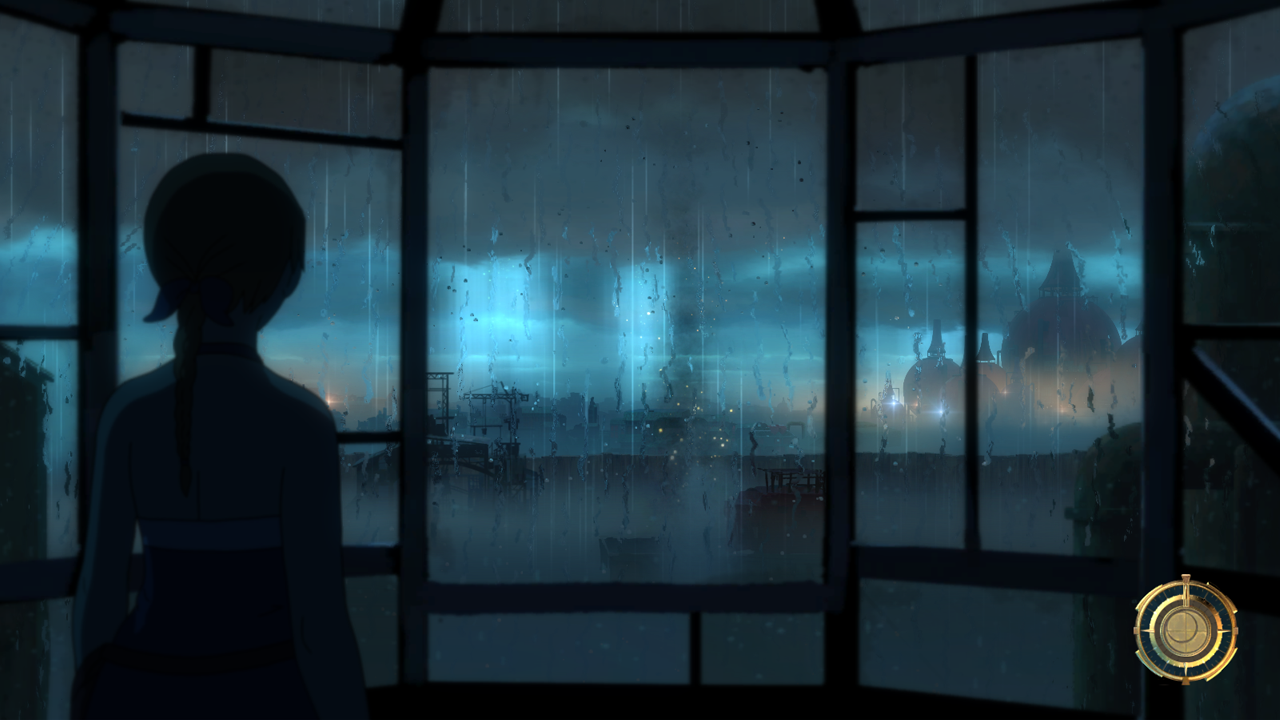 There’s an underlying sense of right and wrong that usually follows your decisions. it reminded me of the decision making that was used in Fable, where you’re decisions determined the story plot.

The game mechanic I really liked is the ‘Arca’ which is a kind of steampunk wristwatch that Anne wears. it has the ability to distil which will remove the life force from the forgotlings, rendering them as lifeless objects.

The life-force or anima as it’s referred to becomes stored in the Arca allowing you to manipulate other mechanisms you come across. As I mentioned earlier this plays a part in the puzzles. Don’t worry you don’t have to slaughter those cute charismatic forgotlings all the time to get anima.

Fortunately, its stored in mechanical devices, Anima storage containers and can be found in circuits around the realm.

The whole focus on the anima, its use and the underlying dilemma of taking it from the forgotlings is a strong emotional connection to the stark reality of life. it also plays heavily in the storyline of the rebellion and forces you to consider your own values as you make decisions.

The storytelling, characters and world that is portrayed in Forgotton Anne is what makes the game really good to play. if you enjoy a strong story narrative that provides a fantasy world to escape to for a few hours you will really enjoy Forgotton Anne.

its a real masterpiece of gameplay with cinematic production quality storyline. I really enjoyed exploring the realm, meeting the characters and playing as Anne. There were moments when I had to really think about the decisions I made, some really reach into your soul and challenge you to think about right and wrong. I haven’t played a game that gave me such emotional involvement since if played the ‘Fable’ game series.

Should You Play Forgotton Anne?

Forgotton Anne provides escapism to a dark dystopian realm where you will question your own values in an amazing story-driven experience. The production value and experience is one that highly recommended.

Fans of platform puzzle exploration games will enjoy Forgotton Anne. Fans of story-driven mechanic games with deep character involvement. Anyone who enjoys the genre of anime style games will find this game spellbinding.

I saw similarities to other games like Another World, Professor Leighton series, Cave Story, Alice in Wonderland and the Monkey Island series. if you want to play a game that feels like watching an anime movie then Forgotton Anne will tick that box.

You’ve read our review, and maybe a few others on this title. Are you interested in getting Forgotton Anne? Have you already played it?

if you found this review helpful please do use the buttons below to Share This amazing game on Social Media.