Crash Bandicoot N.Sane Trilogy is an HD remake of the Crash Bandicoot games that was originally launched in the 90’s. Vicarious Visions are responsible for the remake now available on the Nintendo Switch. With a little help from Activision. My Crash Bandicoot N Sane Trilogy review takes us back in time a little, and not all works in the modern day.

Whether you know and love him or never heard of this crazy marsupial before, my look at this game on Nintendo Switch is below. And, sadly, it’s not all that great…

Crash Bandicoot N.sane Trilogy contains the first 3 titles in the game series that appeared in the 90’s.

Given this fact and that I remember playing these games back when they first came out I was excited to see how well they have stood the test of time. Starting with the first game Crash Bandicoot the game is relatively simple in concept; run here, jump there, collect the crates, dodge or attack etc.

But here lies the problem, whilst this gameplay was revolutionary in terms of 3D level design it looks and feels very basic compared to modern-day 3D platform games.

The first thing you will notice is that the camera is fixed with no option to rotate. Somewhat of a limitation given it has become the norm in 3D platform games now.

Secondly, the game is really difficult. When I say difficult some of the sections will challenge the most skilled gamer. The level designs have a lot of hazards which result in instant death.

I didn’t like how you had to be pixel perfect on your jumps and avoiding collisions with hazards and enemies. Sometimes frustration and feelings of ‘that seemed a bit unfair’ became common during gameplay.

Fortunately, checkpoints have been added to relieve some of the repetition from making mistakes.

Not Aging So Well…

Crash Bandicoot isn’t a bad game, it’s just a game that hasn’t aged well in terms of design. As a remake its faithful to the original game, but it suffers from what I call limited legacy gameplay.

When the original games were delivered analogue joystick didn’t exist, everything was D-pad button controls. Whilst the remake does allow the choice between using the analogue sticks on the joy con or the pro-controller something just doesn’t seem right.

I found that using analogue controls didn’t make the game easier it made it difficult. I was slipping from narrow platforms and missing landings after jumps. The controls were too sensitive for the game. After switching to D-pad button controls I found the game played much better.

The second and third games in the trilogy; Crash Bandicoot: Cortex Strikes Back and Crash Bandicoot: Warped feature pretty much the same game formula. Traverse the level and collect the crystal and open the crates.

There are some vertical scrolling levels where you get to ride on an animal and you have to avoid hazards and collect items. If you’ve played Temple Run on mobile gaming platforms you will recognise this type of level.

In addition, Crash gains additional moves such as crouch jump (which isn’t explained, but necessary for many areas) when combined with jump he can gain extra height. From the perspective of a newcomer to the game I got one of my gamer friends to try one level from each game in the trilogy.

They felt that the second and third games were much more accessible and easier to play. They found the first game really frustrating and almost unfair at points where hazards were hidden from view until you landed on them. 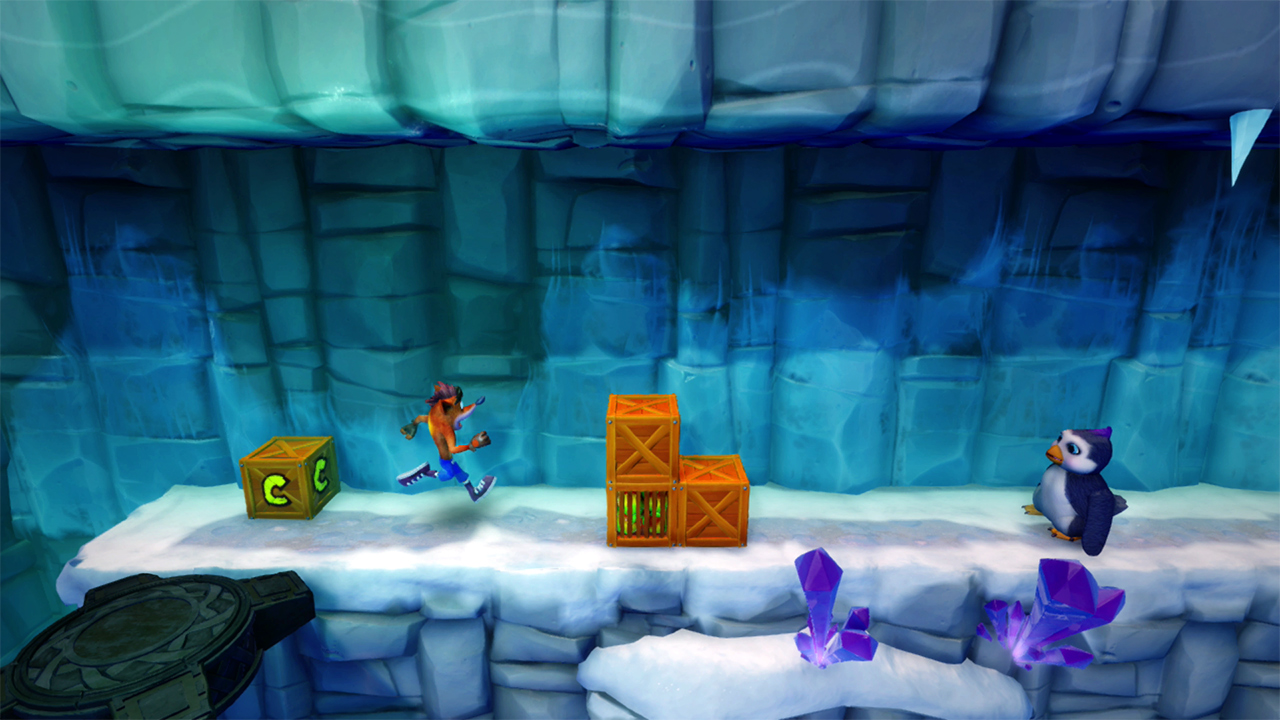 Whilst there’s no need to play the games in the released order unless you want to experience the story in the correct order, newcomers might want to start with the newer games first.

Crash Bandicoot N.Sane Trilogy is a faithful remake in HD of the original gaming series.

For this, I can’t fault the experience, but where it does suffer in gameplay is that 3D platforms games have evolved considerably since its original launch. If I was to compare the trilogy to what we have got used to in terms of playability of games like Super Mario Odyssey(my review) it does feel like a limited experience.

Whilst this might sound a bit unfair think about how you used to enjoy Super Mario World 3D until Odyssey was released? Crash Bandicoot N.Sane Trilogy isn’t a bad game if you judge it by 90’s gaming standards, it succeeds as a remake in that aspect. But its playability does have limited appeal to the current gaming market.

Staring with the graphical comparison this HD remake runs at 720p in handheld mode and an upscaled 1080p in docked TV mode. Frame rates are capped at 30 fps and don’t suffer from any slowdown, stuttering or performance related issues. Loading times were quite good for each level, although I was playing a digital version of the game.

From the perspective of the HD remake Crash has never looked so good. Obviously, the PlayStation era of 32-bit console power wasn’t HD so the HD remake is going to shine and look much nicer.

But from a retro perspective, I did wonder why a retro mode wasn’t delivered in the package for pure nostalgia reasons. The gaming assets are all remade in the beauty of HD and from an eye candy point of view, Crash looks really good. The cutscenes are equally as nice to watch with cinematic story quality.

I really got a feeling of nostalgia from hearing the soundtrack and some of the tunes really got stuck in my head. Hearing Crash’s voice again was really fun especially considering it was over a decade I last played it!

Overall Crash Bandicoot N.Sane Trilogy is a benchmark for HD remasters of 90’s games. From the perspective of playing in handheld mode on the Nintendo Switch, this is a good version of the game.

If you’ve played the PS4 version of this remake it’s pretty similar in the graphical department.

Details of the graphical presentation, style and performance. In addition to a look at sound, quality of user interface etc. 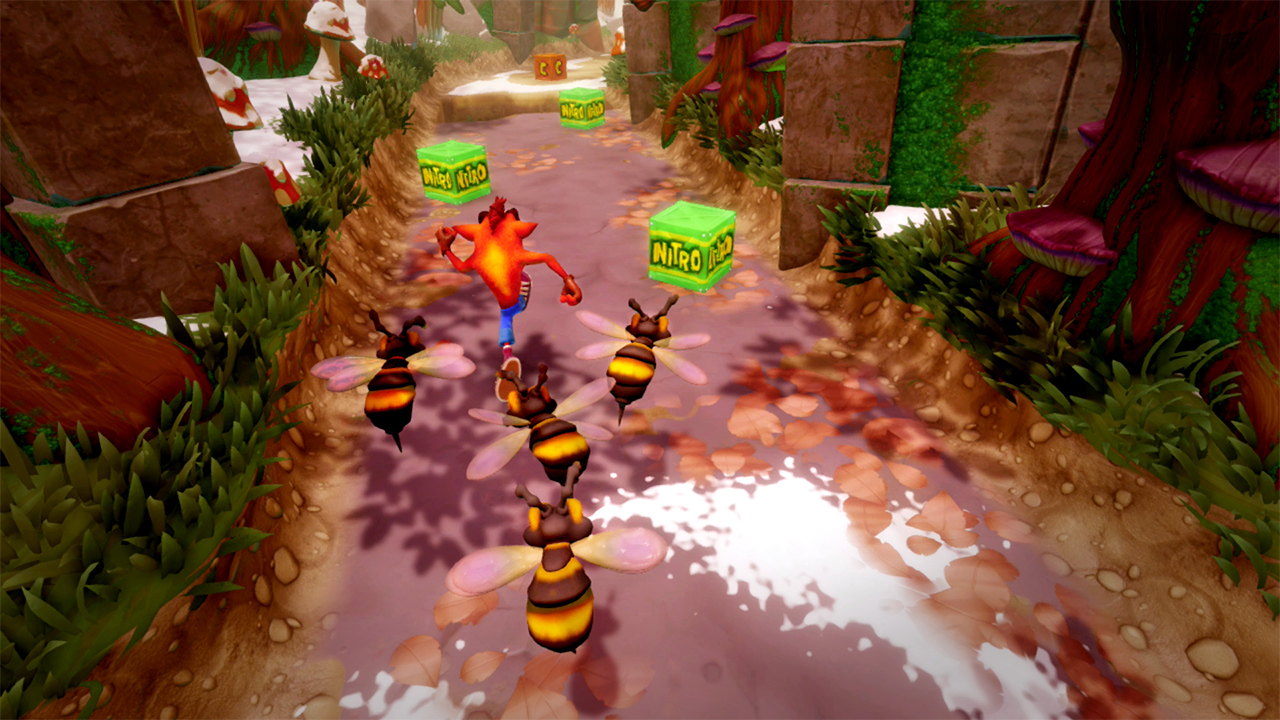 The first game which launched him spinning and jumping to fame was rather aptly named Crash Bandicoot! Crash is an eastern barred bandicoot, native to the southern hemisphere. He lives on N.Sanity island where he is captured by the evil Dr Neo Cortex and enhanced by science.

However, the original plan to make him evil fails and he escapes the clutches of the evil doctor. Consequently Crash finds out after escaping that his girlfriend is held ransom by Dr Cortex. Cue the crazy gaming antics of Crash as he traverses the island to rescue her. 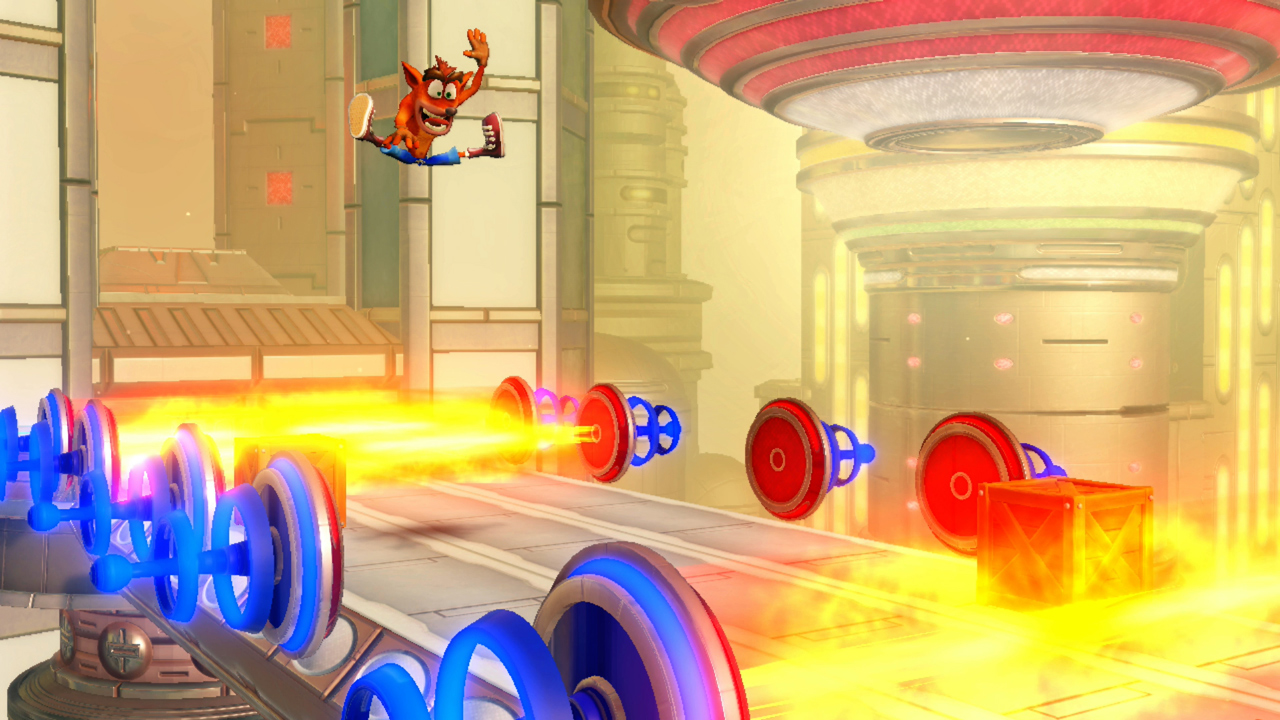 Each of the 3 games has roughly the same story modes which feature near linear level design that must be completed to progress in the storyline.

With each level, there are gatherables that appear in the form of crates. Each crate either contains apples which grant extra lives for every 100 collected or T.N.T (which should be opened with care).

The story has a comic feeling to it with cutscenes featuring both Crash and his nemesis Dr Cortex. In addition to completing a level, a bonus is granted for collecting all the crates, in games 2 and 3 of the trilogy, you are required to collect crystal shards to progress too. Completion of collecting the objectives will grant new levels to play.

In addition to standard game story mode is the Time Attack / Trial mode. Once you complete a level you can attempt to complete the level as fast as possible for entry onto leaderboards.

This mode is more likely suited to the hardcore player rather than the casual gamer. There are also new levels added to the game. Future Tense is a completely new designed level that can be found in the Crash Bandicoot: Warped remake.

Crash Bandicoot N.Sane Trilogy is no doubt a benchmark for other remakes / HD remastered games. It is faithful to the original games, it captures all the aspects of the originals and brings them to the Nintendo Switch.

However, I should point out for this very same reasons the game the game is a tough cookie to play. It has all the hallmarks of the 90’s style 3D platform games. The levels can be frustratingly difficult and feel unfair at times.

They are linear in design with a camera view that is fixed I f you can overlook these design related issues that haven’t aged well then you may enjoy the trilogy. For me, it was the big hit of nostalgia!

Fans of 3D platform games from the 90’s era will enjoy this game. I f you have played Crash Bandicoot before on the PlayStation and want to revisit the trilogy in HD you won’t be disappointed. But beware this game is not a walk over. I f you’re looking for a challenge then look here.

You’ve read our review, and maybe a few others on this title. Are you interested in getting Crash Bandicoot N.Sane Trilogy? Have you already played it?