As this tiny often overlooked character, you have to explore your way through 3D platform levels seeking out gold coins, diamonds and golden stars. The game a single player, however, a second player can control the camera and provide some assistance.

Captain Toad Treasure Tracker is a game that will appeal to all ages and provide a ‘just one more go’ gameplay experience.

Captain Toad Treasure Tracker is great fun to play. Like most games that feature characters from the worlds of Mario, the main movement mechanic is jumping and bouncing around.

Captain Toad differs from this by prohibiting the use of jumps.

This means the tiny loveable Captain Toad or his equally cute Toadette friend have to use a totally different strategy to succeed. The basic idea of the game is to solve each of the puzzle levels by exploring.

Toad has to waddle his way around each level using ladders, warp pipes and cleverly designed puzzle pieces in the form of elevators, levers and moving platforms. After a series of levels, you have to face a boss fight where you need to beat the character in an exploration battle. 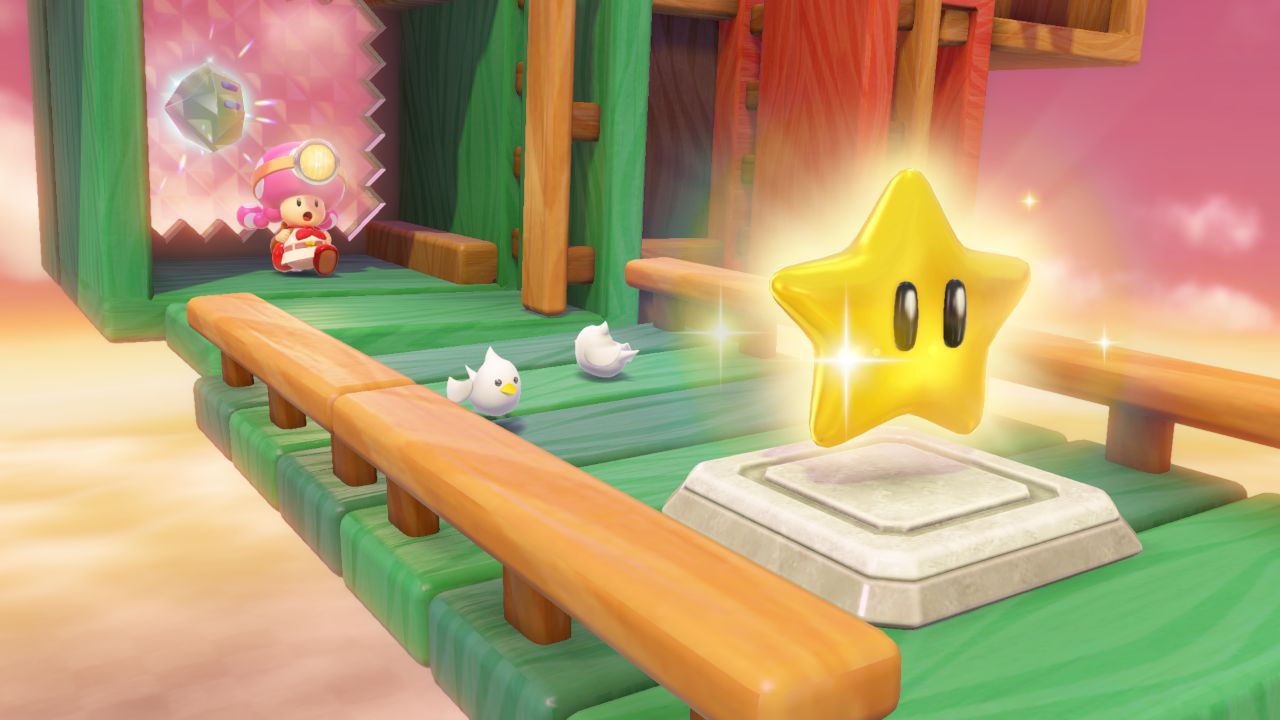 You gather all the collectables, get to the golden star and a cutscene will show how you beat the boss.

Each level has a series of puzzles that require exploration of all of the area to find the coins, 3 hidden gems and a golden star. In addition, each level has a bonus challenge which is usually unique to the level design.

Some of the challenges I saw during the review required collecting all the coins, using minimal platform rotations, killing all the enemies or avoiding all the ladders.

Each of these challenges adds extra fun and value to the game and you don’t have to complete them all at the same time, which adds to the replay value of the game. 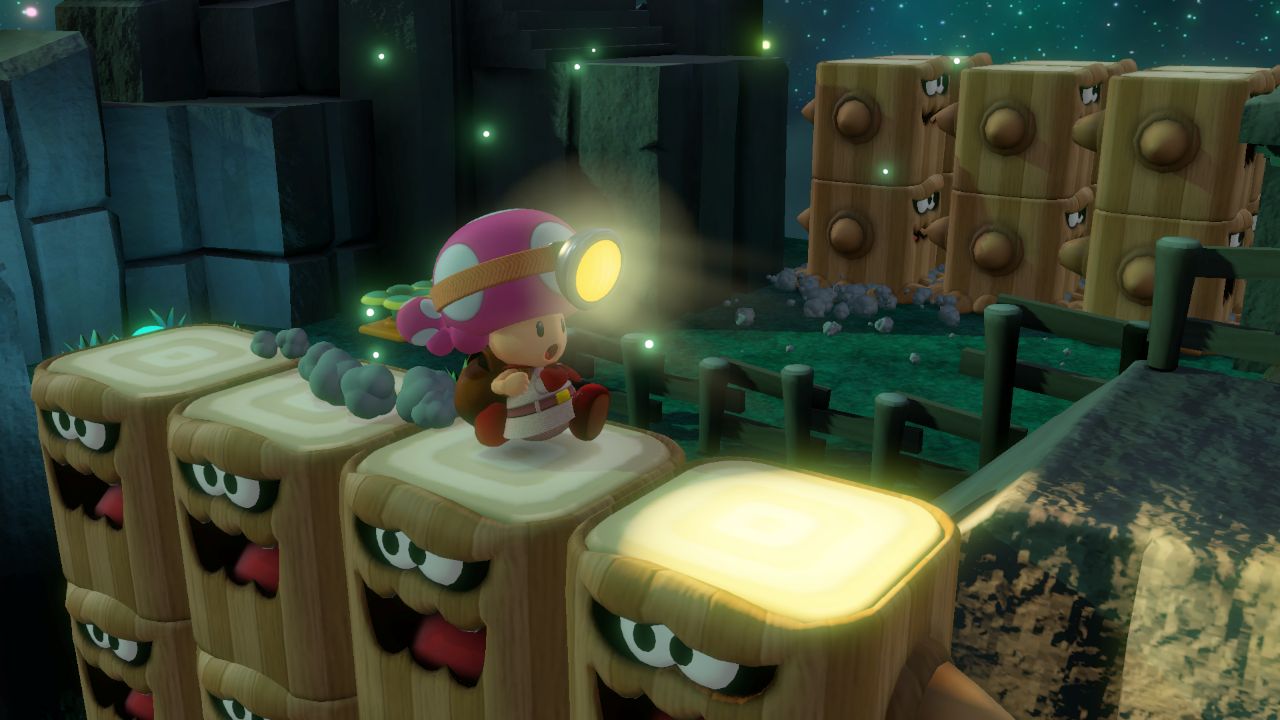 Graphically Captain Toad Treasure Tracker is gorgeous to look at.

On the Switch docked to TV, it runs as 1080p and a downgrade to 720p in handheld mode. This is a graphical upgrade from the Wii U version that ran at 720p on the TV.

I couldn’t really see much difference between the Wii U version and Switch version in terms of menu design, textures and graphical assets. It’s a faithful port to the Nintendo Switch that in some place looks a bit sharper and slicker.

The story mode is an exact port of the Wii U game. You play as either Toad or Toadette who are trying to find the golden star which has been stolen by huge eagle boss called Wingo. You need to work your way through the series of levels and as the story progresses you unlock more levels by collecting diamonds.

Some of the boss levels will require you to have collecting a set number of diamonds to unlock access. The mechanics of the level design are varied including underwater sections, huge mountains and some really fun on the rails minecart rides.

The single player story mode has some changes to the Wii U version of the game. Whilst the Wii U game was strictly a single player experience, Captain Toad Treasure Tracker on the Nintendo Switch offers 2 player gaming.

Player one controls Toad or Toadette with player 2 being able to help rotate the screen and throw turnips at the enemies on each level. Player 2 also can help by interacting with the moveable objects such as platforms, lifts, sliding puzzle pieces or even rotating the whole level upside down!

This feature utilises the motion controls on the pro controller and the Joy-cons. 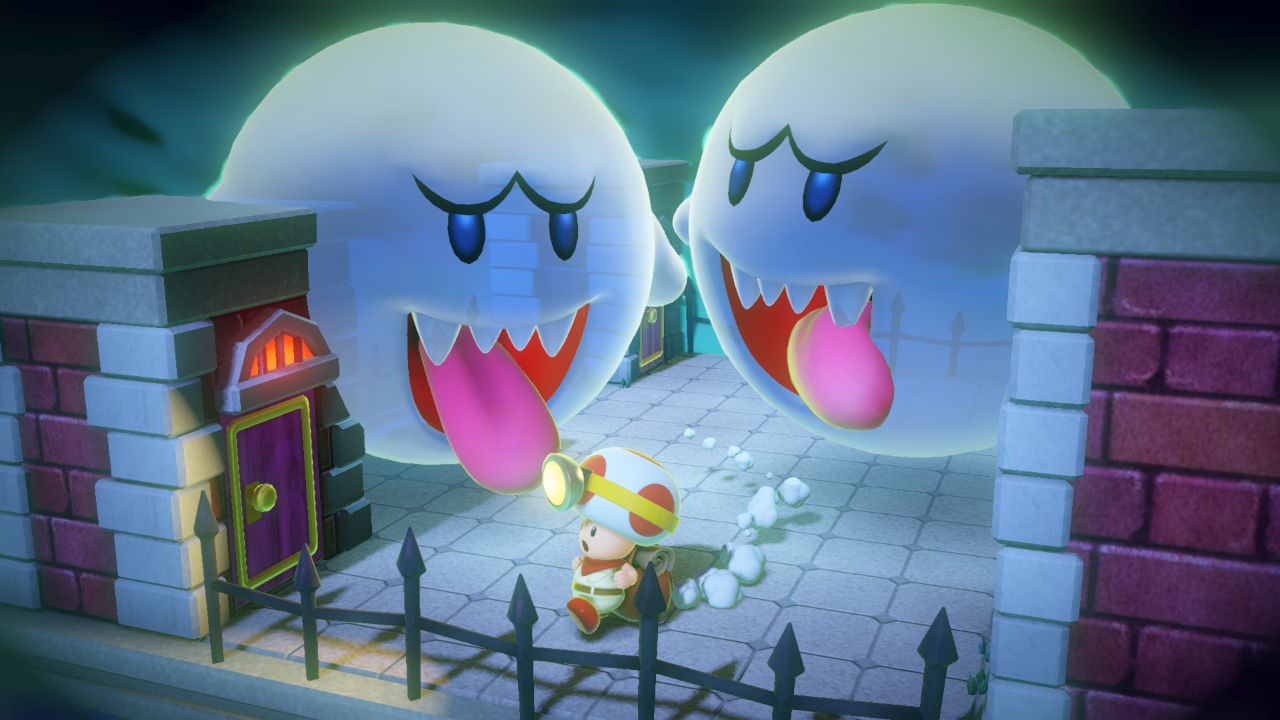 If you played the Wii U version you might remember the ‘Hunt the 8’bit toad’ mode that could be activated by using the Toad Amiibo. Well, the Nintendo Switch version has this mode unlocked for each level.

It simply in-game hide and seek.

Find the 8-bit toad somewhere on the level and complete the challenge. Unlike the normal mode, you cannot collect all the treasure at the same time, but it’s still some fun. If you do happen to have the Toad Amiibo using him in the game will grant you a brief spell of invincibility, which can be helpful.

Amiibo’s feature quite heavily in the Nintendo Switch version of Captain Toad Treasure Tracker. If you own the Mario Odyssey Wedding set of Amiibo’s including Bowser, Peach or Mario in their wedding outfits they will unlock a whole new set of levels.

These new levels come straight from the world of Mari Odyssey as new content. They provide a refreshing look at some of the iconic worlds from Mario Odyssey. They are a bit harder on the challenge department but add extra fun to the game. These 4 levels can also be unlocked by beating the game for gamers who don’t have access to the Amiibos.

If you have any other Amiibos you can scan them in to provide up to 99 lives for toad and more coins. In a world full of baddies having 99 lives is a much-welcomed option. So dust off those Amiibos.

Captain Toad Treasure Tracker is a fun game it has plenty to offer almost any age and ability of gamer. There is some two-player gaming to had albeit at a basic level.

Overall Captain Toad Treasure tracker on the Nintendo Switch is a great opportunity to play a classic game from the Wii U era or to revisit it again.

The difficulty and challenge are suited to gamers of all ability, its 2 player fun mode will support family gaming. If you like games with the ‘just one more go mentality’ then you should check out this game.

You’ve read our review, and maybe a few others on this title. Are you interested in getting Captain Toad Treasure Tracker? Have you already played it?