The Telltale Batman series had a mixed start for me. The first season creates a new situation for Batman fans, one where Bruce Wayne’s past becomes totally different from the standard, parents shot in front of him, issues. Here he not only has to deal with them being killed, he also finds out they had a lot to hide in life… So, at this point of my Batman The Enemy Within episode 1 review, I say read no more if you have not played the first series!

Everything starts off where the last left it, where Bruce Wayne has a new threat to deal with, and a few others too. As before it’s a Bruce and Bat situation, an issue I had with season 1 where it was overly Bruce at times. Personally speaking, I want to play a Batman game not a Bruce Wayne game, unfortunately it was the latter too often last time.

But the start of The Enemy Within episode 1 makes a great step forward. One with good balance of both what makes Batman and Telltale games so good. With our new review system in place, I’ll share my thoughts on the episode below. But I won’t be setting a final MGL Award until the end of the series.

Please note: There will be NO SPOILERS for the overall plot and choices within this review, only an overview of the first episode in this series. Subsequent reviews will contain MILD SPOILERS of the past episodes.

If you can have the life of billionaire Bruce Wayne but NOT be Batman… Or, be The Batman but not have the Billionaire life of Bruce… which would you choose?

It’s a twist on Telltale standard the Batman series. One that pushed the game engine to its limit last time out, and it showed in the gameplay. But, with my previous choices carried over from last season, this first episode was a lot more stable and had a nice gameplay addition. 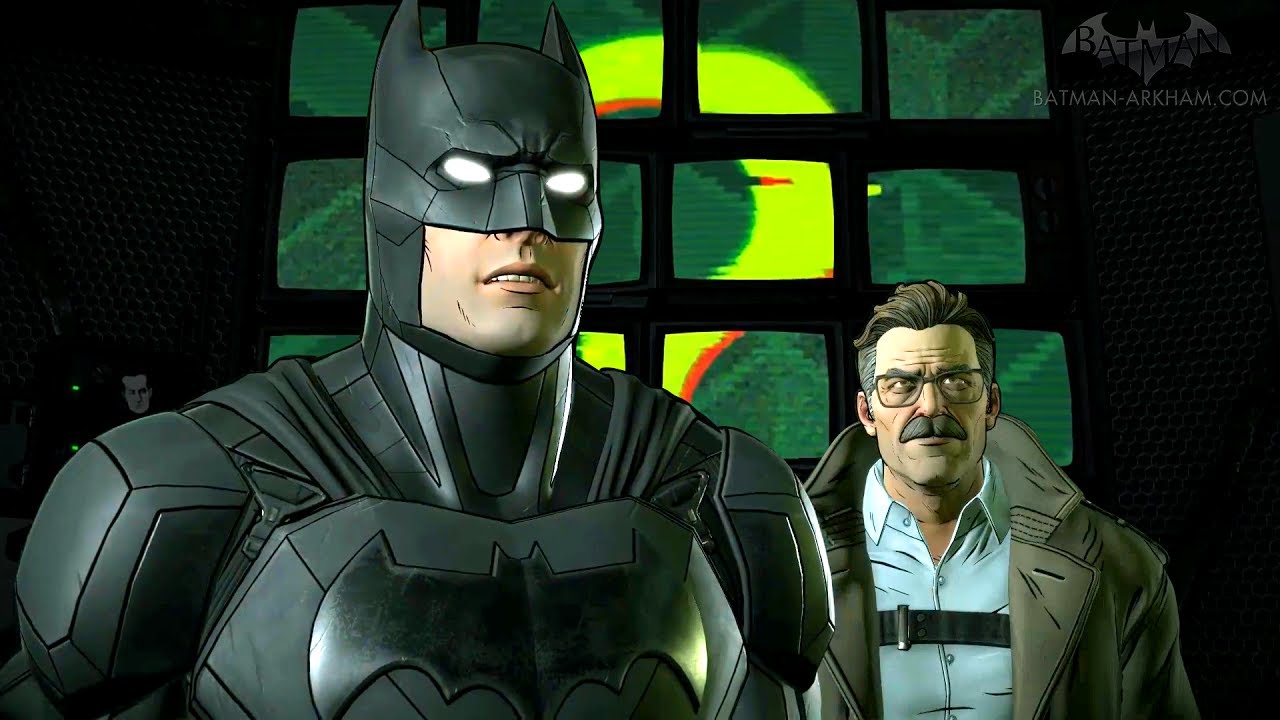 The action is all quick time event style interaction as the scene plays out. Often it’s about style over success/failure but it can lead to failing badly.

What’s new are the optional take-down methods within the QTEs. These make you think a little as to how you want to deliver the final blow in a battle. I quite enjoyed the selection and it makes it worth replaying again to see what happens with the other choice.

Speaking of choices, they are of course the stable of these games. They affect the games direction in majority choices, usually a this-or-that decision is major. Others in conversation affect relationships and interactions with others. These can build a positive or negative relationship going forward which I’m enjoying continuing in with.

Investigations are back too, you are dealing with The Riddler this time and need to solve one of his puzzles with Commissioner Gordon. It’s nicely put together in a mix of puzzle, action and well told story.

Considering the far more technically stable game so far, everything gameplay wise is pretty smooth. It’s still a Telltale game and has many standard elements of their work. However, this feels the most “gamey” series of theirs to date and I’m looking to see how it progresses.

I am a Telltale Games fan for a few reasons, but one is how they really capture the graphics of a series. The Walking Dead has a real feel of the comics about it, yet this is more of a cartoon style presentation. It works really nicely too, everything is well captured and detailed while having a smoother, more game like feel to it than other Telltale titles.

Being a story based title you need well designed facial expressions and voicing to really carry off the emotions of what’s happening. In various conversations with Gordon, The Riddler and new characters to this series Amanda Weller. All of the faces really move with the emotions and revelations of the plot and it’s backed up by some great voice acting.

Troy Baker picks up the role of Batman once again and is excellent as both Bruce and the Bat. Murphy Guyer does a fantastic job of James Gordon too but there is also Enn Reitel (Alfred), Debra Wilson (Weller) and the constant from last series Anthony Ingruber as “John Doe” or The Joker.

Everyone does a great job of their parts and work together well. It’s got some great moments between the characters already so I can’t wait to see how it plays out. And performance and presentation wise it’s off to a great start.

Story is at the heart of all Telltale Games series and here it’s all about the first episode, which is pretty long it has to be said. I played thinking it would be over in 90minutes or so but it was well over 2 hours in the end.

But it certainly never dragged.

Riddler is back in Gotham and has a puzzle to solve for Batman. But it’s clear he’s not working alone too. Something else is going on but it’s not clear exactly at the outset. One thing this twisted story does is not take things for granted either. Making Bruce’s parents effectively a part of the local mob and making Vicky Vale the villain as Lady Arkham makes me wonder if others will be different too.

Plus, there is Weller’s agency getting involved with The Riddler and very in Batman’s face too. You are soon deciding loyalty to either Gordon or Weller in the episode but where that will take you it’s not clear right now. It’s certainly hard to trust anyone.

What this does do is create that mystery and uncertainty to keep you playing. These things can become overly formulaic and so far it doesn’t feel like that. I’m definitely ready for more.

As a series I think Batman has the potential to be as good as The Walking Dead which, for me, is their best work. In many ways the first Batman series should have been battling it out with it for first place but too much was technically wrong. Plus there is the whole Bruce VS Bat issue.

But with the start of this series we have a lot of things getting better already. Technically it’s sold. The story was excellent with some great choices and nice mix of action, interactions and puzzle solving.

It’s a far better prospect of a series for me and one I hope continues in this way. Hopefully getting Batman into the action as much as Bruce.

I’ll be updating with each episode on MGL so make sure you Like our Facebook page and Follow on Twitter for more. Once the series is complete I will do a final verdict review.