We saw some great news revealed by Nintendo at the latest Nintendo Direct showcasing some impressive Nintendo Switch games coming up. We have tried to make it easy on you fans and put together this one page September 2018 Nintendo Direct roundup.

Here you can watch the full 40minute video. Get the details and trailers of the games revealed like Luigi’s Mansion 3, Animal Crossing and super cute Yoshi’s Crafted World. Plus, great news for Final Fantasy fans.

All if it is below with official details from Nintendo so enjoy… don’t forget to use the share buttons to save a friend some clicks!

Ok, if you fully missed it and have around 40minutes, here is the whole September 2018 Nintendo Direct video. It’s well worth a watch, but further down the page are all the main headlines and videos separatley if you prefer.

This one was what we were all wondering about. Nintendo have confirmed exactly what comes with online and that it launches September 19th. Plus there is a growing library of classic NES games coming along with it, which is pretty cool

In addition to Splatoon 2, more online games will support voice chat through the app, including Mario Kart 8 Deluxe, ARMS and Mario Tennis Aces. Nintendo Switch owners won’t automatically become members when the service launches on 19th September, so they will need to purchase an individual or family membership in order to keep enjoying online play in compatible games.

For more information about the service, visit http://www.nintendo.co.uk/switchonline.

A free seven-day trial will also be available. At launch, 20 NES games, including Super Mario Bros. 3, The Legend of Zelda and the newly announced Pro Wrestling – available for the first time since its 1987 release – and Ice Hockey will be available to play, with more games added regularly.

For those waiting for this (including one of our writers who is very excited today!) we finally have Animal Crossing confiremed on Switch. The game is coming next year and that’s about all we know for now. Officially, Nintendo say:

Another big reveal saw Luigi return for more spooky adventures. As a fan of the original on the Gamecube I was happy to see this one confirmed. Much like Animal Crossing, there is little to go on other than it’s coming next year. From Nintendo:

Luigi’s Mansion 3 (working title): The next instalment in the spooky series is currently in production, and will launch exclusively for Nintendo Switch in 2019.

I’m a little surprised more isn’t being made of this super cute Yoshi adventure. This game looks really good and, despite moving from this year to Spring 2019 it still has my attention.

Nintendo has revealed a little more on this “Crafted World” you’ll be exploring:

Yoshi’s Crafted World: Play as an adorable Yoshi travelling through a world crafted from household items like boxes and paper cups in this new Nintendo Switch platforming adventure.

After travelling through a stage, players can start at the goal and journey back to the start on the “flip side,” the rear side of the course, to discover new secrets. Yoshi’s Crafted World launches on Nintendo Switch in spring 2019.

More on Pokémon now as the game is getting close to launch! Find out more on the game and what you can do in the video. PLUS there is a special console bundle to enjoy if you don’t have a Switch yet… Or just want a Switch with Pikachu on it!

During the adventure, players will be able to use their partner Pokémon (either Pikachu or Eevee) to overcome obstacles using Secret Techniques. These are skills that only partner Pokémon can use, like chopping down trees, travelling across water or soaring in the sky.

Both games launch exclusively for Nintendo Switch on 16th November. A bundle including:

Who loves a good remaster? Well, I do personally since I never owned a Wii U and missed games like Super Mario Bros.U! Now we are getting a revamped version of the game on Switch with all the content plus some extras as detailed below:

Up to four players can enjoy this revamped version of the classic Wii U launch game when it comes to Nintendo Switch on 11th January 2019.

Mario, Luigi and Toad return as playable characters and are joined by Nabbit and Toadette, who can transform into new character Peachette by grabbing a Super Crown, offering new ways for beginners to play together with friends and family.

New Super Mario Bros. U Deluxe will also include New Super Luigi U, the first platformer with Luigi in a starring role, at no extra charge. Between both games, there are a whopping 164 courses to play.

Ain’t no party like a Mario Party! And we are going to be playing on October 5. Be ready for lots of games to enjoy as detailed below:

In the newly-revealed Sound Stage mode, up to four players can each shake a Joy-Con in rhythm-based gameplay, while the River Survival mode offers the series’ first four-player co-op.

Plus there’s 80 new mini-games, a single-player Challenge Road, the mini-game gauntlet Online Mariothon and much more. Super Mario Party launches for Nintendo Switch on 5th October, and is available for pre-purchase on Nintendo eShop and the official Super Mario Party website, with purchasers receiving double My Nintendo Gold Points when the game is released.

With Smash Bros coming up, we also had confirmed another console bundle with the following confirmed by Nintendo:

The Nintendo Switch Super Smash Bros. Ultimate edition launches on 16th November. However, the download code for the game won’t be active until the game launches on 7th December. 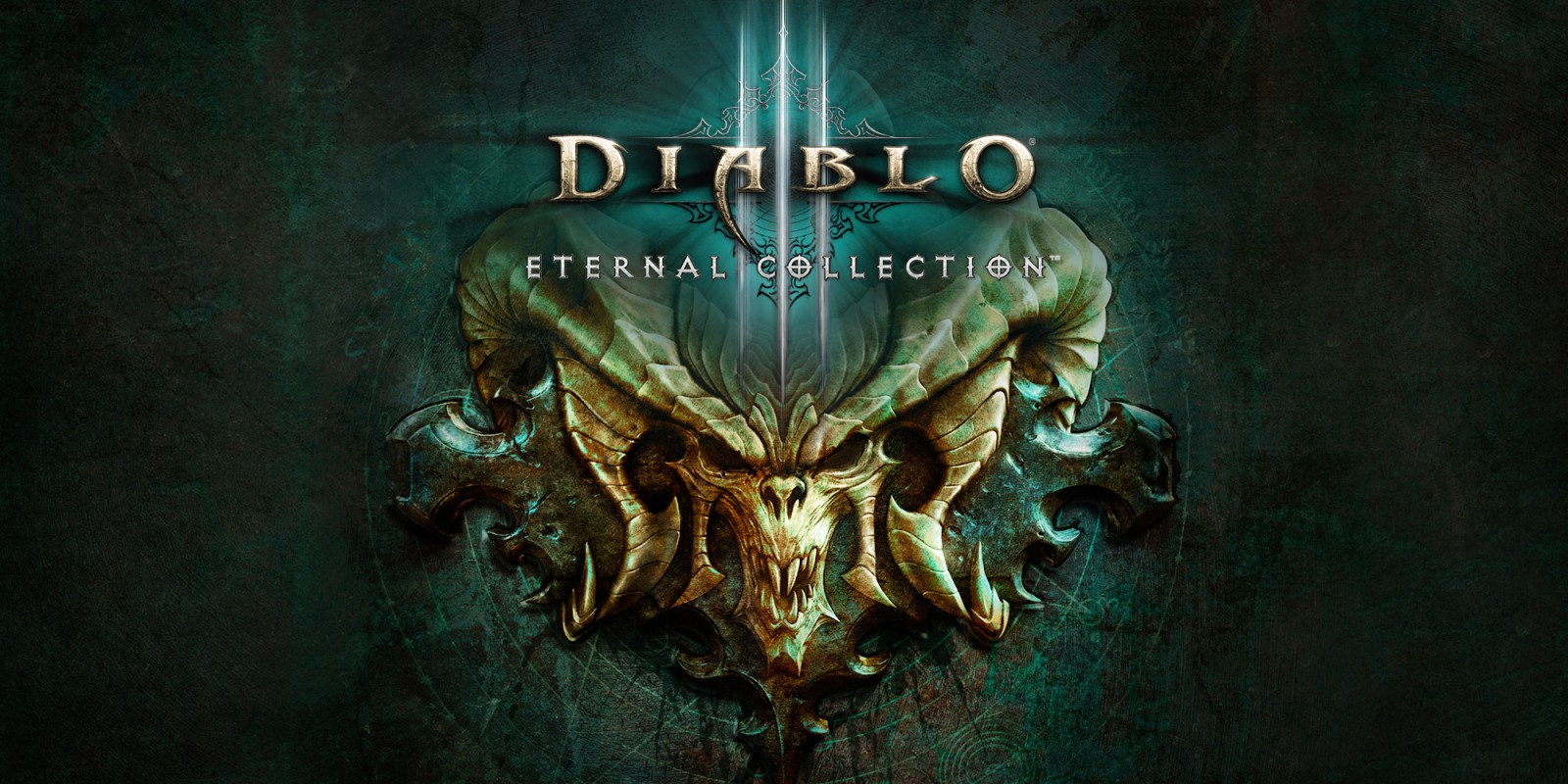 Get ready to go dungeon crawling on the move! And probably miss your stop on the commute as you get absorbed into the world of Diablo on Switch. Decend into the demoic dungeons in November:

The Nintendo Switch version of this classic action-RPG will send players on a journey through Sanctuary, where they’ll vanquish the armies of Hell and plunder powerful loot as one of the seven playable classes.

Up to four players can adventure together via local or online multiplayer. The Nintendo Switch version of the game features the exclusive Legend of Ganondorf cosmetic armour, compatibility with all current amiibo figures, and more. Diablo III: Eternal Collection launches on 2nd November.

I dread to think of the total hours of my life have been spent on Final Fantasy games. Now I can add some more along with you Switch fans out there as a host of FF games hit Nintendo Switch (and Xbox One) for the first time. See which ones here:

As if you didn’t have enough RPGs to enjoy here is another and an expansion to an existing Switch RPG. Xenoblade Chronicles 2 gets new content in September and The World Ends with You comes to Switch in October. Details below:

Owners with the Expansion Pass on 14th September, before it hits shops as a standalone packaged version on 21st September.

This was another game to be shown with a working title and ambigous description. But it’s by the Pokemon developers, so we are of course very interested in TOWN in these early stages. What detail there is is below:

GAME FREAK, the developer of the Pokémon series, is creating a new RPG exclusively for Nintendo Switch. In TOWN, players must take up arms against invading monsters, all within the walls of a single village. TOWN launches for Nintendo Switch in 2019.

A lot of people went mad for this when it was confirmed. And with good reason! We are going to be rolling in Katamari on Nintendo Switch in 2018. See the information below:

New fans will be joining the chorus when an HD remaster of the classic Katamari Damacy comes to Nintendo Switch, complete with HD rumble, gyro control and multiplayer support with the Joy-Con controllers.

This was one of the standout games from this Nintendo Direct with some impressive looking visuals and gameplay. Daemon X Machina looks incredibly stylish and action-packed and one to watch in 2019. Details below:

In this stylish action game first revealed at E3, the world and its inhabitants are on the brink of extinction. As a mercenary, players will pilot a powered-suit called an Arsenal and face runaway AI.

Defeat enemies and acquire parts that can be equipped on the fly or brought back to base to craft new armaments. Use additional tactics by changing between projectile and melee attacks or take the fight on foot to gain an advantage in battle. DAEMON X MACHINA launches for Nintendo Switch in 2019.

Get your rackets back out for more Mario Tennis action as we get some additional content and online play to enjoy. There are new characters and play modes comming so fans of the game, check out the info below:

After downloading a free update to the action-packed sports game on 19th September, players will have access to a new online co-op mode that lets players participate in time-limited missions with other players.

Complete objectives while these missions are active and players will receive special outfits, characters with alternate colour schemes, and more. Also, be on the lookout for new upcoming playable characters like Birdo, Shy Guy, Koopa Paratroopa and Petey Piranha.

Another existing title is getting an update with more Splatoon 2 content coming soon. This arrives in October and contains the following:

Splatoon 2 Version 4 Update: Starting today, the first set of new weapons in the Kensa Collection are coming to Splatoon 2 as part of the new Version 4.0 update.

These familiar weapons are painted with stylish monotone designs. In addition, significant new Splatfest changes are coming as part of this update. From the beginning of October, Version 4.1 will bring a new stage, new songs and more Kensa Collection weapon sets compete with new sub and special weapons.

Some of Capcom’s most classic arcade games like Final Fight, Captain Commando and Knights of the Round are coming to Nintendo Switch with up to four-player local or online play.

This also includes games that have never launched on home consoles before, like Armored Warriors and Battle Circuit. The bundle launches in Nintendo eShop on Nintendo Switch on 18th September.

Get Strategic in Cities Skylines and Civilization VI

Now I quite like a strategy game and it will be interesting to see how they work on the Nintendo Switch. Fortunately, we don’t have to wait too long since Cities Skylines is out now. Plus Civilization VI also heads to Switch in November.

Civilization VI: When the acclaimed strategy game comes to Nintendo Switch on 16th November, it will do so with an exclusive four-player wireless LAN multiplayer mode.

This was a pretty substantial Nintendo Direct with plenty of good games on show. The highlights certainly lean towards RPG fans and those who have been waiting on Animal Crossing.

It’s also great to see more third-party titles coming to Switch, but there is always room for more in that regard. But, this was a strong show with a lot to be happy about if you are a Switch owner.

Can’t wait to see what is coming up next for Nintendo in the coming months. Thanks for checking out the roundup and don’t forget to use the Share Buttons below, and save your friends clicking and searching around!