Fan’s of the Dreamcast hold a very special place in their heart for SoulCalibur. Personally, I have always been a big fan even though other fighters get more attention. So I wanted to get a look at the latest game this year, and here is our Soul Calibur 6 preview after taking it on recently.

We had a really good time smacking each other around on the game, which left us both VERY impressed. My colleague David even saying playing it for himself sold him on the latest in the Soul Calibur series.

Geralt VS Grøh (Rossco VS David) 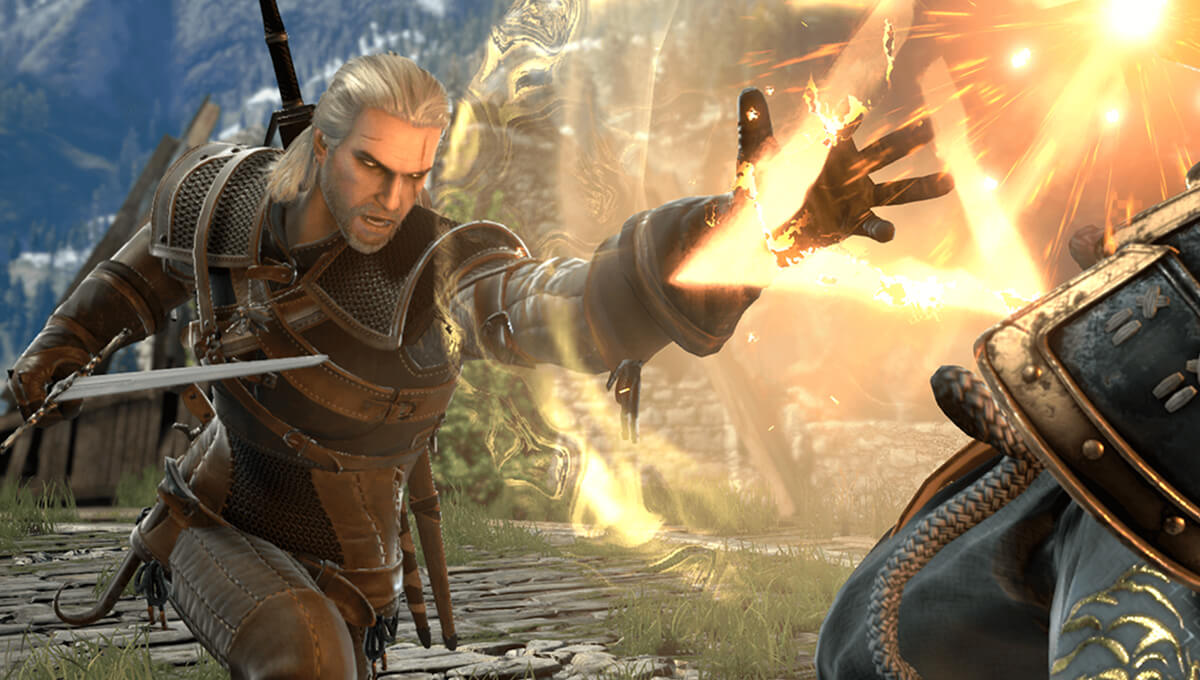 David and I sat for an MGL grudge match based on what game was better in 2018, God of War or Spider-Man. The winner would get the final say! A safe bet considering we love both but I thought God of War was marginally better, David was going for Spider-Man.

Choosing Geralt I was feeling good about my chances, I changed to a red skin on The Witcher’s costume and look decidedly bad-ass.

David went with Grøh, a rather impressive fighter, armed with a single-handed sword and referred to as “The Agent in Black”.

We both went into battle fully impressed with the visuals, taking a moment to look around. Fighting games do get the benefit of having a small area to work in with all those pixels getting plenty of opportunities to show off.

Character detail, animation and overall shine from the game are breathtaking. And while we were just jumping into a match, the controls were silky smooth to put into action.

The biggest factors in the game are the animations of the characters which are so unbelievably seamless. Then the lighting and particle details as you unleash powered attacks, such as Geralt’s Witcher signs that really do create a sense of fantasy and power in combat.

In the best of five system used in SoulCalibur, you have more time to really come back if you need to. Thankfully things were reasonably even between David and I as he took some rounds, then I took some back.

Both of us forgot about the ring-out element of the title too. Since smashing your opponent over the edge of the rings really does turn the tide. It’s especially good to do when you are close to death and it feels awesome to boot someone over the rather precarious side of a cliff with one or two hits remaining.

Although it has to be said, there is little Heath and Saftey is not a big consideration in the game with all those exposed drops!

After getting to grips with the controls and the back and forth we both really did love the impact the characters had in general combat. Hitting really feels powerful, Geralt has some high impact moves while not being overly quick.

Daves character was a bit more speed based with some more agile attacks. They had me awaiting moves and hitting on the counter. But, with the Critical Edge super-attacks at his disposal, he unleashed some powerful moves on me.

During my beating, I figured out how to unleash my own which as equally as impressive. Very much a SoulCalibur take on the super-moves we’ve seen in many popular fighters in recent games.

In the final round I managed to unleash Geralt’s special ability after taking a few hits, going into the final moments it was tight but a flurry from David and it was all over.

I lay there vanquished with David getting the final say on the argument BUT I was not unhappy. This really was a fantastic experience, both of us feeling ready to get back into the ring when the game comes out.

We had a blast on this game at EGX. Watch the video above for more of our thoughts on SoulCalibur Vi too because it was a surprise stand out game.

We did want to see the big games at the show, this was not quite one that made the top of our list while we were making it.

But it’s right up there at the top after playing it that’s for sure. We really enjoyed the high impact gameplay, super smooth animations and the lighting effects on the impact of those big moves.

The characters felt unique but balanced too, given neither of us ran away with the fights we had. Add to that the icing on the cake with Soul Edge super moves, you have one impressive game. So long as the story element is meaty and fun, we can’t see this not being great.

One element I am concerned about is ring-outs. While they are great to do, I do worry that they may get spammed a lot during online play. Perhaps this will be something to watch during the Beta test on the 29th of September.

We both highly recommend you play this one while the game is available. It’s an impressive 3D fighter, one we both have high hopes for October 19 now it’s been experienced first-hand.

Will you be picking up SoulCalibur VI?

After those thoughts, do you think SoulCalibur 6 is going to be worth playing? Will you be picking it up when it releases next month? Let me know what you think in the Disqus or Facebook Comments below