Finally, gamers got some time on Fallout 76 with the Xbox Beta going live. While I get going some more on the game, and bring you some impressions, I wanted to run down why I can’t wait to get into the Fallout 76 online world.

Below find out the reasons I think this could be one of the most interesting Fallout titles to date below. Plus, this article includes videos, images and some information on the game you might find useful.

Are you picking up Fallout 76 in November? Let me know, Yes or No, in the comments. And don’t forget to Share This with fellow Nuka-Cola drinkers using the buttons above.

One of the features that I am most excited about is the online multiplayer aspect of Fallout 76. Fallout 3 and 4 have provided many opportunities for the single player to be accompanied by AI-controlled non-player characters.

Whilst I’ve had fun exploring the wasteland with my faithful canine companion dogmeat. Killed mutants with Paladin Dance which was fun. I’ve even gone full out detective mode with Nick Valentine.

All of these exploits have left me feeling a bit hollow on the virtual friend front. Many a time I’ve wished I could have brought along a real friend on my adventures in the wastelands.

Fallout 76 has been shown as predominately a multiplayer online with small groups of players battling it out. From my experience of playing Fallout 3 and Fallout 4, I’ve seen some truly inexcusable behaviour from my AI-controlled companions.

I won’t go into detail here as I’m sure you’ve had AI getting stuck on terrain and not doing what you ask sometimes. It is, for this reason, I’m overjoyed that I Fallout 76 will allow me to ditch these experiences and bring my real gaming friends to the wasteland.

Having seen the reveal videos of teams of survivors taking on enemies my mind boggles at what enemies we could end up fighting in team battles. My hopes would be fighting hordes of Deathclaws whilst manning the walls of my settlement.

Could we get to all control parts of the huge robot Liberty Prime? I know one thing, super mutants will be much easier to fight!

5Base Building get C.A.M.P

Construction and Assembly Mobile Platform (C.A.M.P) was revealed at E3 by Bethesda. What is C.A.M.P? It basically is an all you build starter kit to start your settlement. You slap it down and up it pops! Hey ho, presto building commences.

Previously in Fallout 3 and 4, you were limited to base/settlement expansion and building in existing sites. I really like the idea of using the C.A.M.P to choose where you get to build your settlement. There are some restrictions on where you can and can’t build, but in general, your options are much more open than in Fallout 4.

Bethesda has released a nice video looking all-about C.A.M.P below. It’s well worth a watch.

No longer must you toil on your own at the whims of the AI NPC characters asking for more housing or a working toilet! You can recruit other friendly players to assist with the building. However with this does come to the added risk of base damage, raiding and complete nuclear destruction!

Fortunately, you can keep blueprint designs to allow you to rebuild if everything is destroyed. With a simple press of a button and to allow quick base rollout… It’s almost as if you can save what you’ve built against its loss.

From the perspective of multiplayer, I’m keen to find out how you can protect your base from other players. I’m assuming you can automate your defences with all manner of weapons that existed from fallout 4.

However, I’m slightly concerned about the whole trolling and vandalism aspect that has unfortunately become the norm in building games.

Nukes, use them? Keep them as a threat? The choice is yours.

The wasteland has many underground missile silos that you can capture and claim for your self. Ultimately you’re going to want to unleash Nuclear war by launching the missile on your enemies. Who wouldn’t? The power of the atom seems quite overwhelming and you can easily destroy your enemies bases.

As much fun as it looks I think the appeal may be limited given the difficulty of getting an active Nuke. Bethesda has stated that access to Nukes will be quite a difficult task as you have to complete quests and scavenge the wasteland to acquire fragments of launch codes.

Whilst it is possible for one player to acquire a full set of launch codes, this will be a long process and perhaps using friends or acquiring allies will help.

Bethesda has also hinted that bases that have been nuked can be easily rebuilt, quickly and cheaply which make this mechanic rather limited and also perhaps prevent getting nuked too often.

Creating Your Own Wasteland

From the radiated earth come prosperous findings. I like that using a nuke creates an area of radiated wasteland. Not only is it harmful to those who might have been there at the point of impact, but it also affects scavengers post-strike.

You will need to wear radiation protection gear to enter the areas. Any creatures in the area may be upgraded to mutations with radiated abilities, so tread carefully! We’ve all seen the Radiated Deathclaws!! avoid if you know what I mean!

But what are the other reasons for braving the radiation filled areas? Bethesda has stated that there are going to be gatherables that can be found in these areas. Loot such as materials, rare resources, minerals and drops from radiated creatures you may find.

But don’t assume you will be alone in searching these areas, other players on the server can visit the area too! It’s going to be gold panning war zone!

If you have played Fallout 4 you will be familiar with some of the Mods that have been added to the game. We’ve had the texture mod changes to make the game look more vivid and realistic graphically and improve performance to FPS.

Cosmetic mods changing the look of the world and characters such as period age changes for old day America. Mods that allow for greater control and management of settlements by adding mayors and leaders. I’m really looking forward to seeing what the modding community is going to be bringing to Fallout 76.

I’m really hoping that modders will bring some faction packs which expand the look, clothing, weapons skins for different factions like the ‘militarised minute men’ mod.

Fallout 76 has been confirmed as having Mod Support but not at release. Let see how creative the modding community can be! 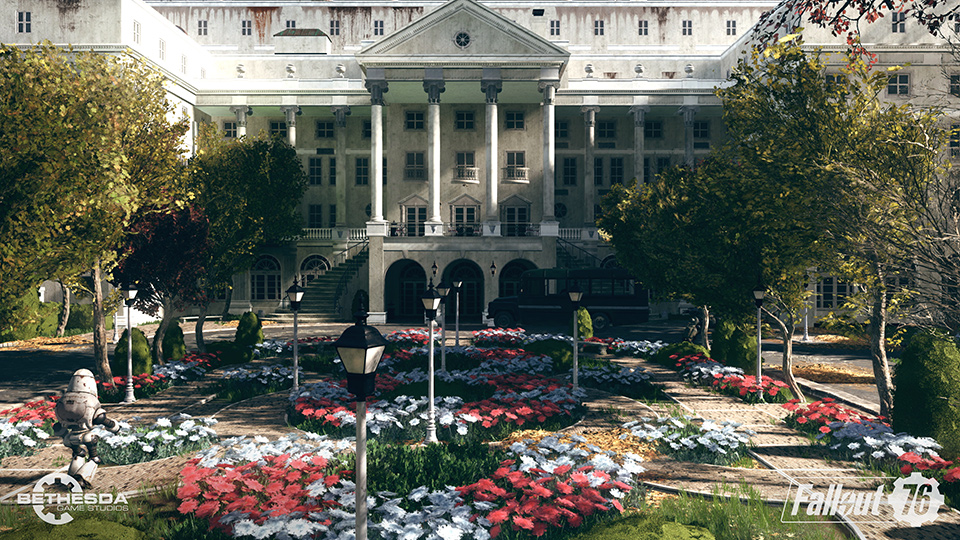 Bethesda announced that when you meet someone in Fallout 76 they want that encounter to be with a real person rather than an NPC. Living in an open world which is 4 times the size of the Fallout 4 world means its a big game area.

According to reveals of the map, there are 6 different regions, The Forest, The Mire, Savage Divide, Ash Heap, Cranberry Bog and Toxic Valley. Given everything I’ve seen and said is it going to be likely that we will bump into human players?

I certainly hope so as the game is an online world with real consequences. As I’ve said earlier Nuked areas will change the map in a big way. I’m hoping we get seasons and weather too.

We know that base/settlement building is a really big part of the game, so you might visit a previously empty area and return a few days to find that a huge settlement has sprung up overnight!

Bethesda also talked about the fact that there aren’t going to be scavengers on the wasteland like we’ve known in previous games.

Their reason for this is that its too soon after the bomb went off. 25 years later not enough people are around from leaving vaults and setting up factions and settlement. The world of Fallout 76 is sparse and open, so they came up with the AI faction of intelligent ghouls called the Scorched.

They aren’t heavily mutated and they still use guns. Kinda like less feral ghouls but with more intelligence.

1West Virginia, take me home to the place of urban legends

Bethesda revealed at E3 that they went to WV and took lots of reference photographs before they modelled the world, you can find out about this in the Fallout 76 documentary from here.

I recently read that one Fallout enthusiast on Reddit went to the lengths to find all the locations that were shown on the game map at E3.

Some of the real world places that really interest me are the Greenbrier Nuclear fallout shelter bunker, created in Washington. This is truly an amazing location and if you have a look at the official site like I did it’s going to a fun place to explore.

Construction began in 1958 on the 112,544-square-foot bunker, which was built 720 feet into the hillside under The Greenbrier’s West Virginia Wing. It was built to house the Senate and also the House of Representatives. Maybe they have a spa and hot tub we can relax in!

Bethesda have gone into some real detail to discuss how they used local lore, myths and legends that were associated with WV.

The Mothman legend from 1966 according to report “On November 12, 1966, in Clendenin, West Virginia, five gravediggers working in a cemetery noticed something that they described as a “brown human being” that flew over their heads, gliding from tree to three reported a huge flying shadow was witnessed” Source Allthatsinteresting.com.

I’ve always been a fan of urban myths and legend and I’m thankful to Bethesda for bring The Mothman story to Fallout 76, I know I’m gonna go looking for it!

The clip behind the scenes of Fallout 76 documentary shows some of the other monsters and myths that exist in real West Virginia. I wonder what other monsters will threaten the wasteland inhabitants in Fallout 76? I know I’m excited by the opportunity of going all Scooby-Doo in Fallout 76!

Will you be getting Fallout 76?

Since you are here, \re you picking up Fallout 76 next month. If so let me know if you are going to be getting it when it comes out! A simple, “Yes” or “No” in the comments below would be awesome.

Found this interesting? Don’t forget to Share This Article with your fellow gamers.